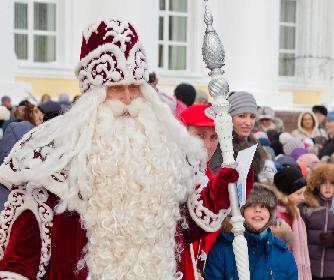 Winter holiday traditions of Russia and the former Soviet Unionnote and also emigrants from the FSU, particularly in Israel where they form a significant share of the population . In Soviet Russia, it was always winter but never Christmas, and the Soviets liked it that way.

Before the October Revolution, Russia was not much different from other countries regarding Christmas traditions. The only important bit of local color was the day of Christmas: the Russian Orthodox Church still observes the Julian Calendar, so their Christmas falls on January 7 for Gregorians. The rest was mostly the same: Christmas trees with garlands and decorations, the old grandfatherly gift-giver who was identified as St.Nicholas (Santa Claus). The New Year was a separate secular holiday estabilished by Peter the Great, and it was not yet intertwined with Christmas.

However, everything changed with the Revolution. At first, the Bolsheviks tried to suppress the winter holiday traditions entirely. Christmas was banned as part of general antireligious propaganda as a "bourgeois clerical tradition", and for the New Year the Bolsheviks simply didn't care. Things changed in 1935, when the Soviet authorities decided to strip the Christmas imagery from everything religious and reattach it to the New Year. Thus the current tradition was born.

Instead of Santa, a new Suspiciously Similar Substitute was created, named Ded Moroz (Grandfather Frost). He was loosely based on an old Slavic nature spirit Morozko (or Jack Frost), who didn't have any association with holidays and was "responsible" for cold and frost; the new Ded Moroz, however, was explicitly a Santa-like figure. A sidekick was also invented for Ded Moroz, his supposed grand-daughter named Snegurochka (Snow Maiden); likewise, she was loosely based on Russian Mythology and Tales but previously didn't have any connection with either Christmas or New Year.

After the Soviet Union was formally dissolved on the day after the Gregorian Christmas of 1991, the little Christmas mess-up happened. Everyone was used to the Soviet New Year, and no one really knew what Christmas is supposed to be like. So it became a mostly quiet holiday for the religious, and every festive tradition remained attached to the New Year.

New Year in Russia has an equivalent of Christmas trees. A New Year tree is always called a fir tree (yolka) even when another conifer trees is used (like a pine). Kids believe that Ded Moroz (the Russian Santa; literally "Grandfather Frost") puts presents under the New Year tree on the Januray 1 night, when they are asleep.

Ded Moroz is usually accompanied by his granddaughter, Snegurochka (Snow Maiden). He carries a staff and a bag of presents. His garments are blue, sometimes red or in some rare cases golden. He travels in a sleigh, carried by trio of white horses. Some parents hire Ded Moroz impersonators to deliver gifts to their children personally, in exchange for a small poem recited by heart, usually New Year themed. Every children's New Year festival, usually carried out in schools and kindergartens, also has a Ded Moroz and Snegurochka. There's also a single official Ded Moroz impersonator who anonymously lives in Veliky Ustyug, Vologda Oblast and is supposed to represent the real Ded Moroz.

There's a number of peculiar traditions beyond that.