Slovakia (Slovak: Slovensko), also known as the Slovak Republic (Slovak: Slovenská republika), is a Central/Eastern European country. The other half of the former Czechoslovakia. Less famous, formerly poorer and with less people (it has a rather low birth rate too), the Slovenská republika (Slovak Republic) became independent in 1993 in the Velvet Divorce. Linguistically and culturally, it is a western Slavic country, just like Poland and The Czech Republic. It has a lot of mountains, with the Carpathians taking up much of the country. The Gerlach Peak in the alpine-like High Tatras (in the northern part of country) is the highest mountain of the entire Carpathians. The southern portions of the country have three lowlands of varying size (all of them a northern extension of the Danubian/Pannonian lowlands). They're Slovakia's main breadbasket.

The ethnic minorities mostly correspond to the nationalities of the surrounding countries, the biggest being the 8.5% of ethnic Hungarians in the south. Considering the fact that during the glory days of Austria-Hungary, a lot of Hungarians (especially their leadership) tried their best to pretend there was no such thing as a Slovak nation (or any Slavic nation, for that matter) within their territory, a lot of Slovaks aren't thrilled about having a bunch of them still living in Slovakia. The historical bad blood between both countries that started in the 19th century has led to various culture clashes over the years, with a recent highly-publicized law about the usage of the Slovak language getting eventually skewered by the EU. Thankfully, most of the population of modern-day Hungary and Slovakia aren't and never were a bunch of militaristic nationalists like in former Yugoslavia.

The country's history during the 20th century

A collection of a number of different ethnicities (Czechs, Slovaks, Germans, Hungarians and Ukrainians), Czechoslovakia was first formed shortly before the end of World War I, between October 28 and 30, 1918, at a time when Austria-Hungary was already falling apart into a collection of new nation-states. Czechoslovakia's independence was solidified in the Treaty of Versailles and the hard-to-define Slovak-Hungarian border was settled according to then-existing statistics about the ethnicity of local populations. Between the wars, Czechoslovakia prospered and was perhaps the most consistently democratic of the new central European states, but its diversity also made it potentially vulnerable. The government didn't mistreat ethnic minorities, but was nevertheless suspicious of them, because Czechs and Slovaks only had a relatively narrow ethnic majority for their nation-state (Czech-born Germans being the third largest group back then, even larger than the entire Slovak population).

In an attempt to justify the Czech and Slovak majority and the country's independence, the government had to resort to the invention of an odd political idea known as "Czechoslovakism": The cultural and political oneness of Czechs and Slovaks. Unfortunately, this caused several problems, especially in later years, because the country wasn't federalized as was promised back in the days of World War I, and both ethnic groups still weren't fully equal in managing domestic politics and economy. Many Slovaks also felt cheated by the misuse of Czechoslovakism as a cheap excuse for glossing over unique issues and economic situations endemic to their part of the republic, and for not fulfilling the promise to give Slovakia more decentralized self-rule, as opposed to direct rule from Prague. As if this wasn't enough, Germans and Hungarians also wanted a bit more autonomy, also formerly promised at Versailles, but similarly not delivered. As World War I became a thing of the past, people in other European countries (like Britain) started to feel sorry for Czech Germans — who weren't maltreated but didn't have any political autonomy — but this sentiment was ultimately hijacked by Those Wacky Nazis and used as an excuse to gradually take control of the country.

Prague was pretty untouched. The Czechoslovaks were not. Hundreds of thousands went to death camps and the Lidice massacre

, one of the most notorious war crimes of the war, took place. As Slavs, the Nazis considered the Czechs subhuman and fit only for labor. As the remaining Czech lands were made into a protectorate of the Third Reich, Slovakia itself became an independent country for the first time in history — but it was actually nothing more than a puppet state of Germany, very similar to Vichy France. And although they often acted like a laughable example of the "Fascist, but Inefficient" trope, local Nazi sympathizers sitting in Bratislava still managed to eagerly send nearly all Slovak Jews into the camps. Thankfully, the Czech and Slovak anti-Nazi La Résistance later got their act together and proved absolutely vital in the assassination

, head of the Czech and Moravian Protectorate (though at the horrifying cost of the aforementioned Lidice massacre).

As if that wasn't badass enough, after much careful planning, they managed to launch one of the largest and most determined anti-Nazi uprisings of World War II on August 29, 1944

, and though it was ultimately crushed by the Nazis, it certainly helped a lot in quelling their presence in central Europe, helping pave the way to an Allied victory. The event is known today as the Slovak National Uprising and is one of the historical national holidays, much like Remembrance Day in Britain.

In the aftermath of the war, the new government had revanchist feelings and made sure all ethnic Germans and Hungarians were deprived of citizenship and expelled or forcefully resettled en masse. Luckily, this sentiment quickly faded away, and ethnic Hungarians remained intact, but most of the German population moved to German-speaking countries.

After a brief transition, during which the renewed government definitely went under the Soviet sphere of influence, Czech communist leaders seized power in 1948. Czechoslovakia soon became Commie Land via one of the "defenestrations of Prague". The '50s saw rapid industrialization overseen by local communist governments, but also the incredibly brutal persecution of clergy, private landowners, dissenting intellectuals and the setting up of kangaroo courts for pretty much anyone who looked even vaguely suspicious to the Party. Naturally, the Propaganda Machine and People's Republic of Tyranny tropes were in full force. After 1960, the country's name was officially changed to "The Czechoslovak Socialist Republic" (as if it hadn't been one before) or CSSR for short.

In 1968, Czechoslovakia's leadership decided to liberalize and started making some first steps towards this plan... then the Soviets sent in the tanks and put the thing down. The '70s and The '80s were the infamous era of "normalization", symbolized by resigned and bitter sentiments of the citizens, who started feeling more and more betrayed by the regime. This period was also the heyday of the ŠTB Secret Police (pretty much the local cousin of East Germany's Stasi). The CSSR decided to honour the 1944 uprising by building a rather funny looking bridge

over the Danube in Bratislava. It wobbles whenever traffic passes over it, which is all the time.

Tensions increased again in 1988 and 1989, with people fed up by Prague's inability to enact reforms and embrace perestroika like other Warsaw Pact countries. The last straw was the adoption of the so-called "baton law" in early 1989, which gave state police ridiculous powers to crush public dissent by any means necessary. It was put into motion by riot police during peaceful student demonstrations in November 1989. The resulting public outrage led to spontaneous strikes and mass protests of people of all ages. The Communist Party was overwhelmed by the protests and forced to abandon their power to a new, democratically elected government, literally overnight.

And so, in 1989, as part of the Hole in Flag era, Czechoslovakia finally became a democracy again in the Velvet Revolution. Three years later, the two halves of the country separated in the "Velvet Divorce", with much of the national property (such as the Su-25 ground attack aircraft) being split 2:1 for the Czechs because of their larger population.

After the turbulent political era of The '90s, modern Slovakia eventually became prosperous with a steadily growing economy. Of course, not everything is perfect, with various corruption scandals in politics on the local and national level still being a major problem, though recently the situation seems to be improving, with more uncompromising civic activism starting to influence Bratislava. The country has been a member of both The European Union and NATO since 2004. In January 2009 it replaced its previous monetary unit, the Slovak crown

, and is now using the euro, unlike the Czech Republic. This makes it easier for visitors from Austria, who can get regular trains over to Bratislava and not have to go through border checks because of the Schengen agreement (quick tip: the ZSSK i.e. Slovakian coach has air-conditioning).

For its modern day military, see Slovaks with Sappers.

For an overview on the evolution of its statehood in the 20th century, look here

For a brief but detailed overview of its entire history, visit this site

Some notable and famous Slovaks :

Slovaks and Slovakia in fiction :

Some movies (actually) filmed in Slovakia: 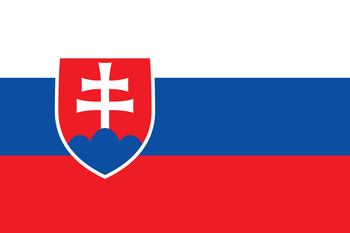 The flag's white, blue and red colors are based on the pan-Slavic scheme; at the hoist side is the coat of arms.
Coat of arms of Slovakia 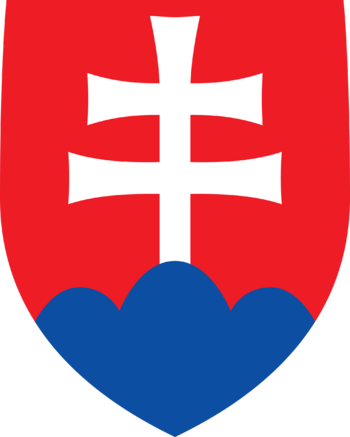 The national coat of arms (first designed in the 1840s) is partly based on the royal Hungarian one, denoting the historical and cultural traditions shared with modern day Hungary. A pre-1840s version of it, with green hills instead of blue, was commonly used as the coat of arms of Upper Hungary, largely congruent with Slovakia's modern territory. It shows a red shield showing a white patriarchal cross, symbolizing Christianity, brought by Greek brothers and missionaries Cyril and Methodius

There is lightning over the Tatras
Thunders loudly sound
Let us stop them, brothers
After all they will disappear
The Slovaks will revive
That Slovakia of ours
Had been sleeping by now
But the thunder's lightnings
Are rousing the land
To wake it up
Government Miscellaneous