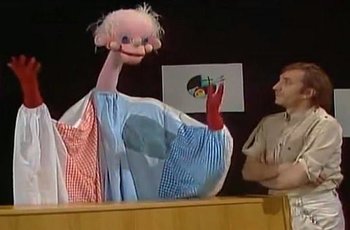 The ultimate example of why you should never judge a book by its cover
Advertisement:

Slniečko was a children's television show that ran from 1979 until 1989 in Czechoslovakia. It roughly translates to "sunshine" or "little sun". Slniečko may have had well over 500 episodes aired. However, nearly all of them are lost.

Every episode of the show was divided into four segments. The first would feature the sunshine hand puppet explain the theme of the episode and pop up during transitions. The second featured Ratafak Plachta interacting with the kids. The third featured children being taught lessons with Ratafak Plachta and the fourth was a random puppet show.

(oddly enough, the clip isn't even from the show). Nowadays, Ratafak is a common fixture on "creepiest kids characters" lists, which is the main reason that non-Czech and non-Slovak people know about the show at all. Despite Ratafak Plachta being unsettling to foreign audiences, he was apparently a popular children's character in Czechoslovakia. The show's message was to think freely and to not blindly obey authority figures, which was an important message for people who lived in communist Czechoslovakia.

For some reason, the character of Ratafak Plachta was involved in campaign for Slovakia's 2009 Presidential Election.