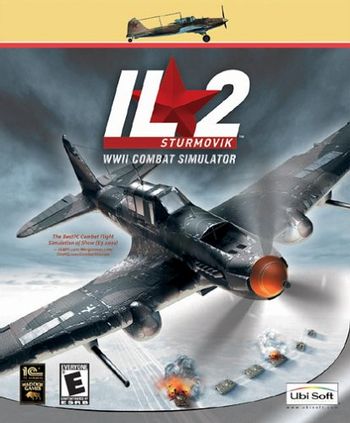 IL-2 Sturmovik is a World War II Combat Flight Simulator for the PC. It was originally started by Russian game developer Oleg Maddox

as a hobby garage project featuring the famous Soviet ground attack plane, which also lent the game its name. It was kept even after the game got heavily expanded and commercially released, spawning this juggernaut of a series shortly afterward. The branding has stuck to the point where the formerly-titled sequel Storm of War: Battle of Britain is now IL-2 Sturmovik: Cliffs of Dover.

The game, along with its 3 main sequels and numerous expansion packs, features literally hundreds of planes (most of them flyable), dozens of detailed gameplay maps in every possible theater of the war and also the opportunity to fly as some of the less famous Axis and Allied powers (e. g. Finland, the Netherlands, Italy, Romania, Slovakia, Australia, New Zealand, and the French and Polish resistance). The expansion pack IL-2 Sturmovik: 1946 features several Alternate History campaigns with many American, German and Russian prototype planes

that never made it into service during the war (many of them early jet fighters).

◊ of flight and air combat, turning the game either into a semi-realistic arcade dogfighter or a punishingly realistic Nintendo Hard flight sim. The game also offers a lot of freedom for creating custom missions and campaigns in its simple and intuitive Level Editor, and is generally opened to adding player-created custom content (including the possibility to add your own skins for the various aircraft or new music and sound files into the game). There's a giant fan community and tons of game mods in addition to the official releases. It's no secret that part of the series' success lay in a dedicated modding community worldwide. A large part of the original modder projects even became official parts of the later sequels.

The series so far consists of these installments: