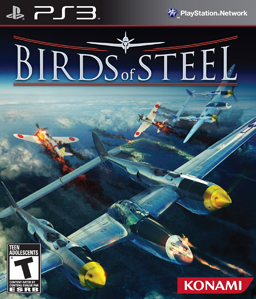 Birds of Steel is a flight simulator set during World War II for PS3 and Xbox 360, developed by Gaijin Entertainment and published by Konami. Birds of Steel's campaign takes place in the Pacific between the United States Army Air Force and the Imperial Japanese Navy Air Service from 1941-1942. Other factions as well as their respective planes are available via single missions and multiplayer.

Birds of Steel provides examples of: