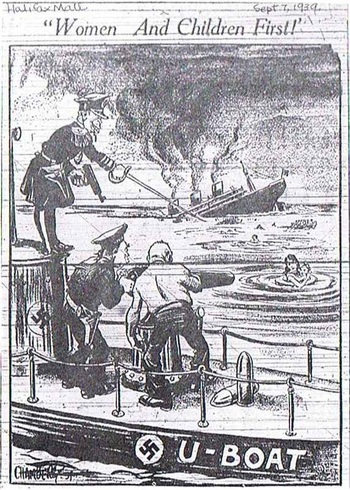 After destroying or disabling an opposing vehicle, a particularly ruthless (and dishonorable) enemy may decide he wants no one to live to tell the tale. He may blast the life boats, shoot down an Ejection Seat or two, blast the Escape Pods to ions, seal off all exits, etc. Obviously, this is usually a pretty low thing to do, and in Real Life wars, may (rightly) be considered a war crime, especially if the craft in question was a civilian craft.

It generally shows just how evil a villain is, and can be a very quick means of making the villain irredeemable in the eyes of the audience, in addition to having the audience cheer louder when the guy who did this finally bites the dust.

Subtrope of Leave No Survivors. If the lifeboats are carrying wounded, overlaps with Kick Them While They Are Down. Frequently treated as a Moral Event Horizon. Shares some similarities in terms of the moral blackness of the act with Shoot the Medic First, though the latter can be arguably be justified for pragmatic reasons, this trope is almost always For the Evulz.

For cases of sinking your own lifeboats (Break the kettles and sink the boats) to prevent holding back, see Burning the Ships. Compare: We Have Reserves.