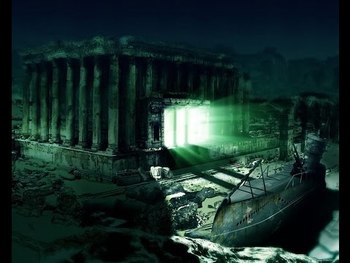 "The Temple" is a short story by H. P. Lovecraft, and his first story to be published in Weird Tales, for which he would later submit a large portion of his work. It was written in 1920 and published in 1925.

The story is presented as a manuscript that has been found in a bottle off the coast of Yucatán. The manuscript in question contains a chronicle written by Karl Heinrich, an iron fisted officer of the Imperial German Navy who commanded the submarine U-29 during World War I. In it, he describes a series of events that occur after his crew sunk a British freighter. The corpse of one of the sailors floats toward the deck of the U-boat, and one of the crewmen finds a strange-looking trinket in his hands. The superstitious crewmen begin to worry that it is a sign of something terrible, but the officers refuse to throw the trinket overboard.

However, over time, strange and unexplained events begin to fall upon the submarine. The crew begin experiencing nightmares and hallucinations which gradually drive them insane, made all the worse by Heinrich's refusal to surrender or throw the artifact overboard. From here things continue to go from bad to worse, as the crew becomes more and more restless, the submarine's navigational systems are inexplicably destroyed, and Heinrich is forced to kill all but fellow officer Klenze to stop an attempted mutiny. The two of them try to navigate for a time before Klenze descends into madness, unable to resist the call of an unknown entity.

Heinrich, now alone, drifts for some time until the submarine finally lands on the ocean floor near a series of ancient ruins. Starting to go mad, he feels compelled to enter a mysterious temple close by. He releases the manuscript in a bottle and willingly goes to his death in the ruins.