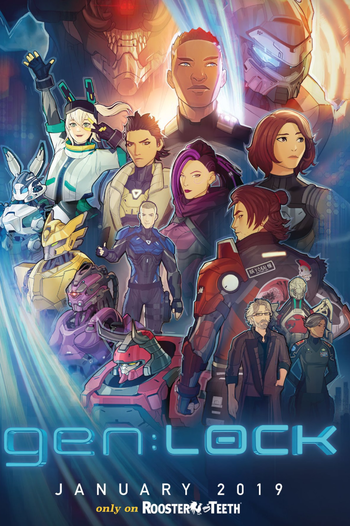 Listen up; this is it. The Union's making their play. This is how the war begins.
"What is gen:LOCK, if not the next step in humanity's evolution? And you can be the first to see where it takes us."
— Dr. Rufus Weller
Advertisement:

gen:Lock (stylized as gen:LOCK) is a Mecha web series from Rooster Teeth that premiered on the 26th of January 2019. Unlike their other two flagship series, while the first episode is free for anyone to watch, the rest of the episodes are exclusive to FIRST members. The series began airing on Adult Swim's Toonami programming block on August 3, 2019. Season 2 was officially announced on October 24th and would be exclusive to WarnerMedia's streaming service HBO Max for 90 days before coming onto Rooster Teeth. The season premiered on November 4th, 2021.

As a summary puts it: on the losing side of a global culture war, an Experimental Science Unit is pushed to identify a team of young pilots who can control a variety of prototype, next-generation mecha—giant, robotic, weaponized bodies. The recruits will find, however, that their newfound abilities come at no small cost.

The main cast consists of:

And Rooster Teeth staff members, including:

In addition to the actual show, DC Comics released gen:LOCK (as well as a series for RWBY) as part of a partnership with Rooster Teeth, consisting of 14 issues. The events take place after the first season.

open/close all folders
A-D
E-M
N-Z
♫ We pretend in the darkness;
We pretend the night won't steal our youth.
Singing me the sweet songs of seduction,
Let me be the fool, fool, fool
Who will live and die for you. ♫