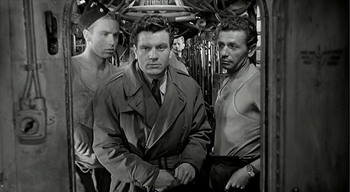 Imagine how it smelled!
Advertisement:

The Damned (Les maudits) is a 1947 French film directed by Rene Clement, set in the spring of 1945 during the final collapse of Nazi Germany. A U-boat leaves a port in German-occupied Norway, carrying an assortment of refugees: a German general; Hilde, his blonde mistress; her husband Garosi, an Italian businessman; Forster, a Nazi Party functionary; Willi, Forster's aide and apparent lover; and Coutorier, a French collaborator.

The idea is to sail for South America, where they will set up some kind of continued resistance. The submarine survives an encounter with enemy surface ships, but Hilde is injured. To treat her injuries, the sub makes a clandestine landing on the coast of France, and some of the passengers kidnap a French doctor named Guilbert. Dr. Guilbert tends to Hilde but then has to worry about his own skin as the boat heads south. Meanwhile, tensions rise on the crowded vessel.

Not to be confused with a 1969 film of the same title or the British punk rock band. Look for a scene where a murder victim pulls a curtain off its rack—Alfred Hitchcock was familiar with this film and swiped that shot for use in Psycho.