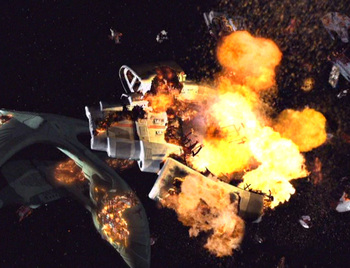 The Defiant is down!
The Breen have entered the war, and they hit the Federation where it hurts: Earth. What's worse, they have developed a new weapon that drains all energy from a ship, and not even the trusty Defiant can withstand it. On Bajor, Kai Winn finally completes her Face–Heel Turn, while on Cardassia, Legate Damar does something that even the Founders never saw coming.