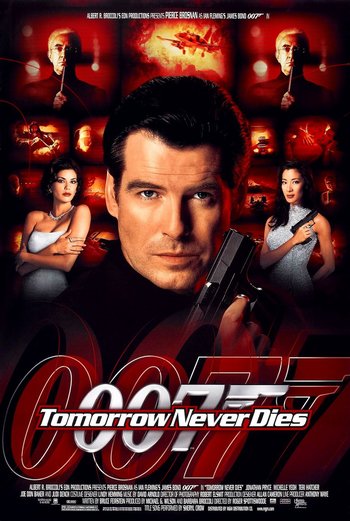 Darling, I'm killed. I'm in a puddle on the floor...
"The distance between insanity and genius is measured only by success."
— Elliot Carver
Advertisement:

The one where James Bond has that remote control BMW... and beats up a Rupert Murdoch Expy.

Tomorrow Never Dies is the eighteenth Eon Productions James Bond film and the second starring Pierce Brosnan. It was directed by Roger Spottiswoode and was released on December 12, 1997. Sheryl Crow performed the Title Theme Tune, and k.d. lang performed an additional song that was added in the end credits.

A British warship and a Chinese aircraft are destroyed off the shore of China, an incident that threatens to ignite all-out war between the two countries. The British claim that their GPS locator showed they were in International Waters, causing MI6 to suspect foul play.

The clues point towards the Carver Media Group Network, a worldwide media empire owned by Elliot Carver (Jonathan Pryce). James Bond is sent to investigate Carver and his organisation to find out if someone is engineering War for Fun and Profit; a task that sees him crossing paths with Chinese secret agent Wai Lin (Michelle Yeoh).

After the more introspective tone of its predecessor, GoldenEye, the film eases back into the Connery and Moore "classic Bond" formula beat-for-beat, with one-liners galore, a Large Ham villain, and plenty of action setpieces that make full use of the Theme Music Power-Up trope. Brosnan also began to carve his niche as the playful Bond.

Followed by The World Is Not Enough.