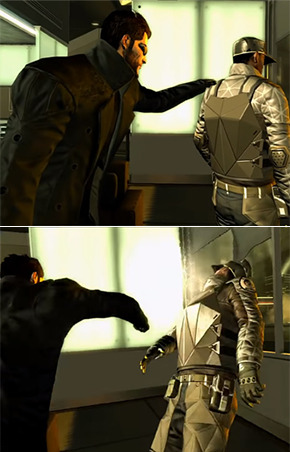 Sometimes, even Cyborg Super Soldiers can't resist the classics.
"Nice to see you again!"
— The Brigadier (just before he punches out the Master), Doctor Who, "The Five Doctors"
Advertisement:

So we all like punching people in the face, right? But the problem with that is sometimes access to your opponent's face is blocked by the back of their head. The solution: tap your target on the shoulder or otherwise get his attention, causing him to turn around, exposing his precious, punchable face. Ahh, sweet satisfaction!

This is also an exception to the "dishonor" of attacking someone from behind.

It may or may not be a knockout blow as it will just as often lead to a Fight Scene as it will to an instant knock out. It is also evenly split between being taken seriously and played straight for laughs. If the target doesn't go down, it usually leads to Punch! Punch! Punch! Uh Oh....