Recap / Asterix and the Goths 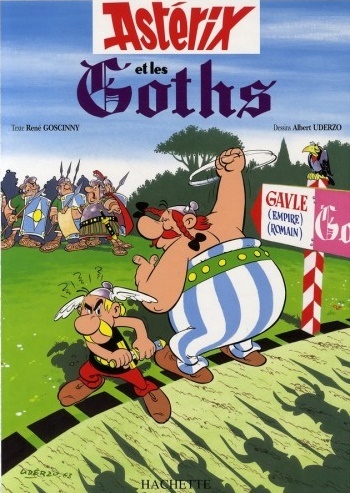 The third Asterix volume is the first one in which the heroes leave Gaul's borders, as Goscinny and Uderzo turn a particularly vicious satirical eye to France's wartime enemy, Germany.

At the conference, Getafix shows off his magic potion and wins the top prize. The Goths quickly kidnap him. When their druid doesn't leave the forest, Asterix and Obelix become worried and start looking. Finding a visigoth helmet lying in the grass, they realize what has happened. However, an encounter with some legionnaires causes the two Gauls to be mistaken for the Goths, and soon the local Romans are looking for the duo while ignoring the very obvious Goths trekking towards Germania.

Both Goths and Gauls enter Germania. While Asterix and Obelix pose as Goths and end up falling in with a Gothic company, Getafix is taken to the Goth leader Metric. Metric demands for the druid's magic through interpreter Rhetoric, promising that if Getafix refuses, Rhetoric will die with him. Naturally Getafix refuses, and Rhetoric lies that Getafix agrees, buying a week to escape. Along the way, Rhetoric bumps into Asterix and Obelix and all three are brought before Metric. It's here that Getafix reveals that he can speak Gothic, and that Rhetoric was lying to Metric. The four (Asterix, Obelix, Getafix, and Rhetoric) are thrown into the dungeons, awaiting public execution. Getafix has a plan to throw Germania into chaos, and asks for the ingredients to the magic potion, under the ruse of final meal. Rhetoric is powered up, and uses his strength to overthrow Metric. The Gauls then go on to give magic potion to Metric and other Goths, creating what are known as the Asterixian Wars. With the Goths busy fighting each other, they will be of no threat to Gaul, and our heroes leave for home.

“These Goths are crazy!”