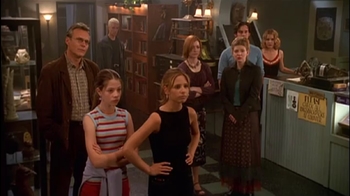 "We're family."
"The women in our family have demon in them. Her mother had it. That's where the magic comes from."
—Mr. Maclay
Advertisement:

Willow and Tara are on the bed in Willow's dorm room, with Tara reading spell books and Willow under the covers. Willow asks for a story and Tara tells her about a kitten. Willow tells Tara she is tired but Tara asks if she can keep the light on to study spells, telling Willow she just wants to catch up to her level. Willow convinces her to come to bed and the two snuggle.

Buffy tells Giles that Dawn is the Key that Glory is hell-bent on finding, and speaks of her struggle to come to terms with the fact that the majority of her memories of Dawn are false. They decide to protect Dawn without telling others about it. In order to be able to protect Dawn properly, Buffy moves out of the college dorm and returns to living at home, citing her mom's recent health issues as the reason to her friends. As everyone helps her with moving her stuff out, Willow reminds everyone about Tara's birthday party.

At the hospital, Ben enters the locker room. A moment later, Glory is there and captures a demon, who tells her that Buffy is the Slayer. Glory sends it and its friends to kill her.

The gang research Glory at the Magic Box, but come up with nothing, as she looks human and they don't know much about her (including her name). Buffy and Xander admit that they do not really know much about Tara, though they both agree that she is definitely "very nice." They wonder what kind of a present to get for Tara. Xander explains that he doesn't really know Tara; the only thing he knows that she likes is Willow, and "she already has one of those." Meanwhile, Spike fantasizes about fighting with Buffy while having sex with Harmony, all the while assuring her that he was only thinking of her the whole time.

Giles overhears Buffy and Xander's conversation and asks them how they could sit in a magic shop and not have a clue what to get Tara, who is a witch, for her birthday, finally concluding that they are "profoundly stupid." A young man comes into the Magic Box and disparages magic. He reveals himself as Tara's big brother, who has come to town with Tara's father and a cousin for Tara's birthday. While Tara is clearly not thrilled at their presence, she agrees to have dinner with her family that evening.

Buffy returns to the Summers house, where Riley has been watching Dawn. As the two discuss how Buffy will return the favor (with talk of outfits), Dawn prepares to have dinner at a nearby friend's house. Buffy balks at this and refuses to allow Dawn to leave the house, and Dawn goes off in a huff. Riley tells Buffy she overreacted and doesn't understand why she's being so over-protective of Dawn. Buffy won't tell Riley the reason behind her behaviour, and Riley leaves frustrated at Buffy's apparent lack of trust in him.

Tara returns to her room to find her father there. He expresses disappointment that she has not moved on from her interest and participation in magic and berates her for being out of reach for months. He tells her she is going home before her friends find out about her evil self. After he leaves, Willow returns and wants to repeat the demon location spell that Tara had secretly sabotaged before. Tara fakes fatigue, so Willow returns to the magic shop. Tara secretly follows her and, from hiding, casts a spell to prevent her friends from seeing her "demon side."

Meanwhile, Riley is drinking very heavily in Willy's Bar after another argument with Buffy. Sandy hits on him, but he recognizes her as a vampire and tells her no. Harmony returns to the crypt and tells Spike that the Lei-Ach demons have been summoned to kill Buffy. Spike leaves, saying he wants to catch a decent seat when they do.

Tara's cousin Beth finds her on campus. When Tara refuses to go home, her cousin derides her for being "a selfish bitch," leaving her father and brother to "do for themselves," revealing that Tara is expected to return home and essentially play the servant to her father and brother. Beth also realizes that Tara has cast a spell on her friends. She smugly tells Tara to tell her friends before she does, and Beth then leaves to find Tara's father to inform him what his daughter has done.

Three Lei-Ach demons arrive to attack Buffy, but because of Tara's spell they are invisible to the gang. They search for the Slayer and attack everyone in their path. Giles hides Dawn under a desk. Only Buffy manages to put up a decent fight. Spike arrives and watches the fight for a few seconds, but can't allow Buffy to be killed and instead helps fights the Lei-Achs, although being demon himself his entire scuffle is unseen by Buffy. Tara arrives, realizes her spell has gone awry, and quickly breaks it. The demons can again be seen, and are now easily beaten.

Tara's family arrives. Her father explains that, because of demonic heritage, all of the women in their family turn evil when they become adults. Willow is visibly hurt that Tara has hidden this from her, and Tara tries to re-affirm her love for Willow. When Tara's family insists on taking her away against her wishes, all her friends make it clear they will fight to defend her, declaring that while the Maclays may be her blood kin, her friends are her real family.

Anya then asks Tara's family what kind of demon she is. Their refusal to give a straight answer arouses Spike's suspicion, so he punches Tara in the nose, activating Spike's chip and proving that Tara is, in fact, human. Spike concludes that the legend of the Maclay women assuming their demonic heritages upon adulthood is just an old family myth maintained by the Maclay males to keep their women frightened and subordinate to them. Bolstered by the knowledge that she is fully human, Tara declares she will stay with her new family, and confidently tells her relatives to leave, which they do after a slight hesitation.

Riley arrives at the birthday party and kisses Buffy. Tara opens cheesy witch-related birthday presents from the gang, and everybody mingles. Tara and Willow embrace on the dance floor and begin to levitate.