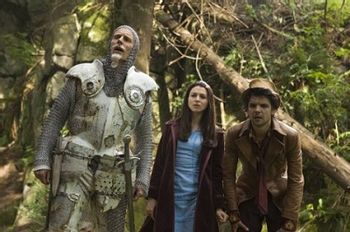 Curiouser and curiouser...
"Does this look like a kid's story to you?"
— Hatter
Advertisement:

The team that brought you Tin Man, a loose reimagining of The Wonderful Wizard of Oz, takes on Alice in Wonderland, saturated with Darker and Edgier and Rule of Cool. When martial arts instructor Alice Hamilton (Caterina Scorsone) sees her boyfriend, Jack Chase, being taken away by some mysterious men in a white van, she chases one of them Through the Looking Glass... and into a Crapsack World. Guided by Hatter (Andrew-Lee Potts) and The White Knight (Matt Frewer), Alice goes looking for Jack, but discovers that things aren't all that wonderful in Wonderland.

This series was a mini-series broadcast in December, 2009. It is not to be confused with the CBS Work Com starring Linda Lavin.

The director has recently done Neverland.