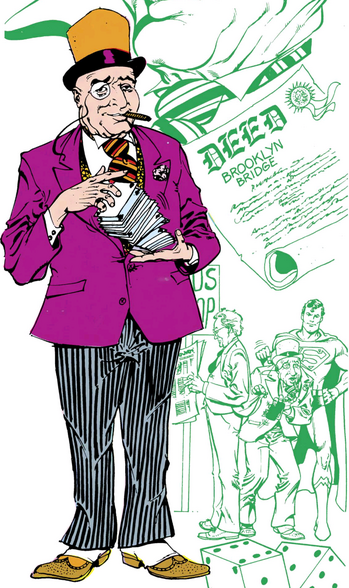 The Con Man (also known as a grifter, swindler, matchstick man, scam artist or con artist) attempts to gain the confidence of naïve people and part them from their money, or at least play them for a fool long enough to get what they want—that is, to pull off a confidence trick.

The basic, stereotypical Con Man can be seen in the streets and alleys, inviting unsuspecting victims to bet on a simple Shell Game that looks fairer than it is or convincing them to buy cheap "deluxe" watches or some other suspicious good. Sometimes they even look like Blatant Burglars. Obviously, real con artists are a bit more subtle about their work, since the whole point of their job is to win the trust of random strangers to scam them out later. They often spin a 'sob story' to hook the victim—maybe their dog is lost, or their car is being towed, or their mother may even be in the hospital. After that, it's all Social Engineering; a truly gifted con artist can get away with almost anything, simply by virtue of appearing sincere and naïve (usually slightly moreso than the victim, on the theory that sympathy almost always gets you something). For complicated cons, the Caper Crew may come into play: large teams might be involved, with each member of the team playing a distinct role.

Hollywood tends to treat Con Men as being one of two extremes. In shows where the Con Man is the star, they are a suave, sophisticated Lovable Rogue, who confine their schemes to cheating the rich and the unlikable. The Cop Show, however, tends to show a darker side. When a Con Man is an antagonist, they tend to target the vulnerable and sympathetic, such as the elderly, widows, and desperate poor people. They may even be murderous and trick people into their deaths. Those types are almost always Slimeballs.

The Marmosets do this by having their leader, Mauro distract the tourists by perform a dance for them and pretending to be a cute monkey so that they can steal various objects from them.

The Marmosets do this by having their leader, Mauro distract the tourists by perform a dance for them and pretending to be a cute monkey so that they can steal various objects from them.