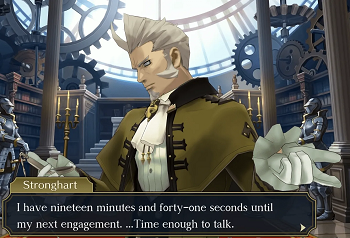 "Furthermore, this caption just took you exactly 4 seconds and 38 milliseconds to read."
"Always a slave to the schedule, that's me."
— Sly Cooper, Sly 3: Honor Among Thieves
Advertisement:

The Clock King is the consummate planner. He doesn't just know when the guard change happens, but what routes they take, how long they spend in the lavatory, how long the cops will take to respond to a burglary alarm with 5:12 PM traffic on a rainy day, and that the 5:20 train will take two minutes and fifteen seconds longer than normal to leave the station, allowing them enough time to get on at 5:22:10.

He has such millimetric precision and obsessive attention to detail that he will frequently boast of being "23 seconds ahead of schedule", or berate lackeys with "You're 17 seconds late". Expect the Clock King to always carry a pocketwatch and chain, or a very expensive looking wristwatch with more hands than Shiva. For some reason, they dislike digital clocks. Maybe they feel those lack (villainous) personality? Also, it's worth noting most Clock Kings and Queens are villains. It's not that heroes can't be this obsessive at planning... they just tend to go with Indy Ploy instead. There's also the larger idea that the villains plan and scheme in secret ahead of time, and the heroes have to react to what villains initiate.

Maybe an explanation for the reason why most Clock Kings and Queens are villains resides in the conflict Harmony Versus Discipline: they subscribe to the latter, the belief that mankind can and should master themselves and their environment for the betterment of all. This can lead to attitudes like Insufferable Genius at best to Lack of Empathy at worst, and all the range of The Jerk Index. Maybe the Universe just wants to be accepted and it favors those who follow harmony. Notice that the polar opposite of a Clock King would be an Idiot Hero, who excels at the Indy Ploy.

He's almost the mirror of The Chessmaster. He can't manipulate people, but he can rely on their strict adherence to patterns and schedules. When they don't, depending on the Clock King, he sometimes goes off the rails (of course, a real planner will know the exact probabilities of each failure, and plan accordingly to win either case). These guys usually aren't that hot at Xanatos Speed Chess, but they are, however, often Awesome By Analysis. He's an example of what happens when a Schedule Fanatic starts to learn other people's schedules as well as his own. Common accessories and plots include the Magic Countdown and Time Bomb. Fond of Ludicrous Precision, sometimes to the extent that he suffers from Super OCD.

Oh, and you had better pray they don't get their hands on Time Travel technology, or being a Time Master, one who can directly control time.

See also Creature of Habit, who also likes punctuality, although rarely for nefarious plans. May overlap with Clocks of Control, which is about any clock-themed character who wants to keep things orderly.

Please allow me to cross another item off my schedule, 'The Unwitting Pawn has read The Stinger of the Clock King article'. Yes, Right on the Tick!

Due to continuously repeating the same day over-and-over again, Phil had managed to schedule and map out every interaction and detail that the citizens of Punxsutawney go through during the day.

Due to continuously repeating the same day over-and-over again, Phil had managed to schedule and map out every interaction and detail that the citizens of Punxsutawney go through during the day.