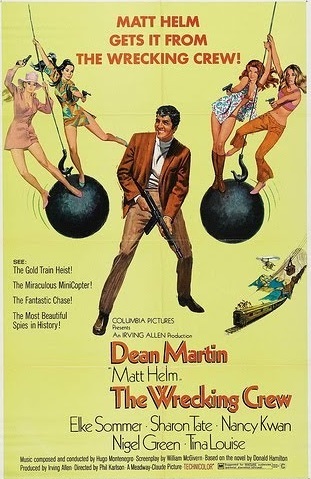 The Wrecking Crew is a 1968 film, starring Dean Martin, Elke Sommer, Nancy Kwan, Tina Louise, and Sharon Tate. It is the last entry in a series of American comedic Spy Fiction films featuring Martin as a secret agent named Matt Helm, a spoof of the James Bond films.

Helm (Martin) is assigned by his secret agency, ICE, to bring down an evil count named Contini (Nigel Green), who is trying to collapse the world economy by stealing a billion dollars in gold. Helm travels to Denmark, where he is given a guide, Freya Carlson (Tate), a gorgeous but bumbling woman from a Danish tourism bureau. Equally gorgeous women are Contini's accomplices, who attempt to foil Helm's plans.

This was the last film of Tate's to be released in her lifetime before her murder at the hands of Charles Manson's followers on August 9, 1969. Excerpts from the film are prominently featured in Quentin Tarantino's Once Upon a Time in Hollywood, which is set at the time of said murder.