Film / Once Upon a Time in Hollywood 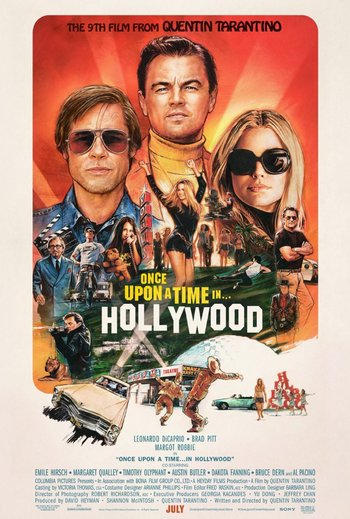 "In this town, it can all change. Like that."
Rick: Actors are required to do a lot of dangerous stuff. Cliff here is meant to carry the load.
Interviewer: Is that how you describe your job, Cliff?
Cliff: What, carrying his load? Yeah, it's about right.
Advertisement:

Once Upon a Time in Hollywood is the ninth film directed and written by Quentin Tarantino. It was released in America on July 26, 2019.

In 1969 Los Angeles, television actor Rick Dalton (Leonardo DiCaprio) and his Stunt Double Cliff Booth (Brad Pitt) embark on an odyssey to rebuild their careers after the cancellation of the Western Series they were employed on, Bounty Law. Rick's neighbor in Tinseltown happens to be Sharon Tate (Margot Robbie).

In 2021, Tarantino himself wrote a novelization of the film (his literary debut, funnily enough) which expanded on the movie's events.

Once Upon a Trope in Hollywood:

"Hey! You're Rick fuckin' Dalton. Don't you forget it."
Feedback