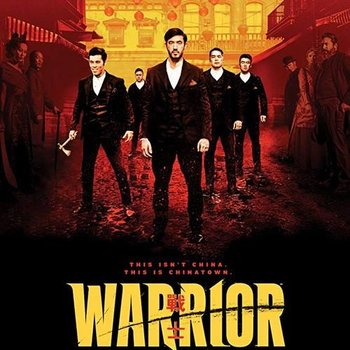 "Warriors have only two paths: get killed or get better."
"This is not China. It's Chinatown. And our blood is cheap here, so you'd better learn to adapt."
—Ah Toy

Warrior is a martial arts, historical crime drama created by Jonathan Tropper and Justin Lin, which premiered April 5, 2019 on Cinemax.

It is based on a treatment Bruce Lee wrote in 1971 for an undeveloped television series titled The Warrior about a martial artist in the the American Old West, but was changed considerably into Kung Fu starring David Carradine. His daughter Shannon Lee serves as one of the executive producers on the series.

Set during the Tong Wars in late 1870s San Francisco, California, the series follows Ah Sahm (Andrew Koji), a martial arts prodigy who immigrates to San Francisco from China in search of his long-lost sister and becomes a hatchet man for the Hop Wei, the most powerful tong in Chinatown as it moves towards open warfare with its rivals. But he will also have to face the bigotry of the city’s white population and the machinations of the corrupt politicians trying to make a profit out of the whole mess.

On April 24 2019, Cinemax renewed the series for a second season, which became the final Cinemax original offering. Shortly after the second season was completed, the show became the first Cinemax series to become available on the network's sister channel HBO (and HBO Max).