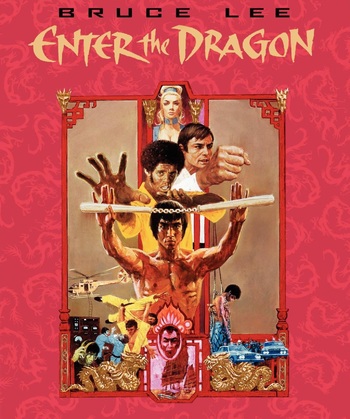 Enter the Dragon is the fourth major film (and final completed film) in the career of martial arts legend Bruce Lee. It premiered in August 1973, one month after Lee's untimely death. Enter the Dragon was the first of Lee's movies to premiere in America and the first to be recorded in English.

The film's story centers around Lee, a Shaolin monk and martial arts master, who is approached by Braithwaite (Geoffrey Weeks), a member of an international intelligence organization that wants Lee to become an undercover agent. The organization has been investigating a man named Han (Shih Kien), a former student of Lee's master, who lives in an island fortress and oversees a criminal empire that has its hands in kidnappings, drugs, and prostitution. Braithwaite's organization "know[s] everything, but can prove nothing", so they recruit a reluctant Lee to infiltrate Han's island during a martial arts tournament held there once every three years and gather evidence that will uncover his crimes. Other central characters of the film include fellow martial artist Williams (Jim Kelly), martial artist and unlucky gambler Roper (John Saxon), and another undercover agent named Mei Ling (Betty Chung). Though the heroes don't often cooperate with each other directly, they each individually work to uncover the secrets of Han's underground operation, risking the deadly penalties imposed by Han and his Made of Iron bodyguard O'Hara (Robert Wall).

Enter the Dragon is still considered one of the finest martial arts films in history. Critics have often praised it for its ethnic equality, as it features heroes of European, African, and Asian descent. It also features Lee as a philosophical warrior, allowing him to tie in his own personal philosophies of martial arts by virtue of his personally rewriting the script to add dialogue at the opening Shaolin Temple scenes. Of course, the real beauty of the film is in the exquisite fight sequences showcasing Lee in his absolute prime alongside with an excellent supporting cast and stunt crew (including future martial arts stars Sammo Hung and Jackie Chan). See for yourself

[Trope Namer] In the film, Lee is attempting to teach a student not how to kick the right way, but to kick the "right" way.

[Trope Namer] In the film, Lee is attempting to teach a student not how to kick the right way, but to kick the "right" way.