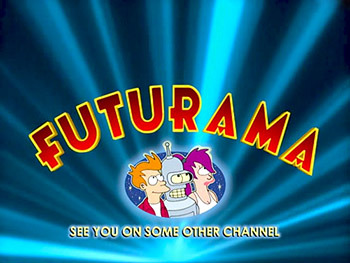 "AVENGE US!"
Meatwad: Won't you ask that TV if he minds showing me some Futurama? I like me some Futurama.
Master Shake: Well now we're too damn cheap to receive it, so go the hell over to Carl Central and watch it to your heart's content!
Meatwad: Carl gets Futurama?
Master Shake: He didn't even want it until we started watching it!
— Aqua Teen Hunger Force, "Bible Fruit

Television shows are usually not directly owned by a particular channel, although once they have a contract to air the show they often have some creative control of it. The only exception is first-run syndicated shows that are owned entirely by the production company and distributed to individual stations, regardless of their network affiliation. At other times a show might be owned and produced by a specific network but the rights to air it were bought out by another network. It's a complicated business where all that matters sometimes is the bottom line.

Just like sports teams, there are many reasons for a show to switch from one place to another.

Note that this only counts new episodes; else, the sheer number of places they've shown Looney Tunes reruns would make the page overflow. Channels calling episodes "premieres" when they know full well that they originally aired somewhere else are telling you Blatant Lies — slightly more honest ones might use the Weasel Words "network premiere".