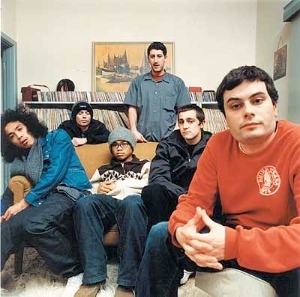 Avalanches above, business continues below...
Advertisement:

The Avalanches are an Australian trio formed in 1997 that deals in Electronic Music. Initially, they started out as a rock group called Alarm 115. The line-up had Robbie Chater on the keyboards, Tony Diblasi also on the keyboards, as well as handling bass and background vocals Darren Seltmann on lead vocals, and later Manabu Etoh on drums. Etoh would later be deported (and The Avalanches actually named one of their songs after him), and eventually Alarm 115 disbanded.

After the parting of Alarm 115, they used some old vinyl records they bought to make a demo tape consisting of 30 songs called Pan Amateur. A new group was formed in 1997 that had Chater, Diblasi, Seltmann, and new guy Gordon McQuilten on keyboards to play the tracks live in concert. Their first four shows were played under various names. note Swinging Monkey Cocks, Quentin's Brittle Bones, and Whoops Down Syndrome. No, really. It wasn't until their fifth show until they finally became The Avalanches. The name is actually a Shout-Out to the album Ski Surfing with The Avalanches by... The Avalanches. note Fun fact: a giant replica of the vinyl pressing of Ski Surfing with The Avalanches appears in the video for "Frontier Psychiatrist" as another Shout-Out.

Their debut single ''Rock City'' was released in September 1997. The debut EP El Producto (which was actually a rap EP) was released later that year in December. The EP was so successful that Steve Pavlovic signed them to his new label Modular Recordings in the following year. Another EP called Undersea Community was released in 1999. UK-exclusive, though.

The Avalanches started work on their debut album Since I Left You in mid-1999, using the Working Title Pablo's Cruise note which would later be merely the title of one of the songs. They finally finished it in early 2000, but the release was delayed due to attempts to get the samples cleared. The album finally dropped in Australia in November (America and the UK got it in 2001), along with a mixtape that served as sort of a preview of the album, along with mixing in some of the samples used on it and the group's personal favorite songs.

They started work on a second album... in 2005. There had been many announcements of the album's development throughout this time period, but no release date was permanently set. They did reveal a demo track in 2012, though.

lampshading the album's long creation process, presumably to confirm that they're still working on it. They followed this up with the release of "Frankie Sinatra", featuring Danny Brown and MF Doom, confirming in an interview that the new album's title would be Wildflower, and making this announcement

on their Facebook page. After 16 years, it finally happened on July 8, 2016 (with a release one week prior on Apple Music), with even more special guests including the likes of Biz Markie, Toro Y Moi, Camp Lo, Ariel Pink, and Jonathan Donahue.

In February 2020, they announced their third album and released a new single, "We Will Always Love You", featuring Blood Orange. It was finished in July of that year

and was released in December 2020.

I found these tropes so new: