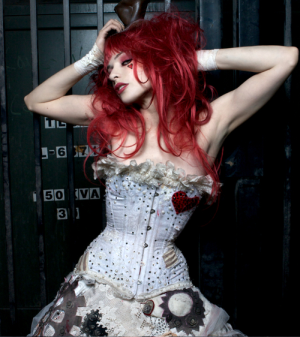 I'll tell the truth: All of my songs
Are pretty much the fucking same
I'm not a fairy, but I need
More than this life, so I became
This creature representing more to you
Than just another girl
And if I had a chance to change my mind
I wouldn't for the world.
— "Swallow"
Advertisement:

Emilie Autumn Liddell (born September 22 1979) is a Gothic poet, singer / songwriter, violinist, harpsichordist, performance artist, feminist, and author. She's self described as that she sounds "like the best cup of English Breakfast spiked with cyanide and smashed on your antique wallpaper."

Of Emilie's life, very little is known at the moment. What we do know is that she started playing violin at the age of four, a talent that she has continued to this day, and that she voluntarily stayed away from most of the mainstream music communities (both classical and commercial) due to bad experiences and clashes within them: In fact, most of her albums were self published by her own company. Her first album was On a Day... a classical album released in 2000, when she was 20 or 21. The following year she put out the Chambermaid and By the Sword EPs. In 2003 her first full vocal album was released: Enchant, an album filled with a number of songs inspired by fairy tales. Also contained in this CD was the Enchant Puzzle, which no one has ever solved. This was the Enchant era, when Emilie was a faerie.

After going through an extremely awful period in her life that resulted in a suicide attempt and hospitalisation, she was inspired to move in a different artistic direction. This began with the Opheliac EP, followed by the full album Opheliac. This album was far Darker and Edgier than Enchant, and a reflection of Emilie's mental state, as this album was released as an agreement with herself that she'd make the album instead of killing herself. The songs are mostly about madness and suicide, particularly in water. Much of the album is influenced by William Shakespeare, as is made obvious by the title. Many of the songs are not written from the perspective of Emilie, but from Ophelia herself, the Lady of Shalott, and others. Later in 2007, she re-released Enchant along with A Bit o' This & That, which was a collection of previously unheard songs, re-mixes, and tracks from older EPs. Also released that year was Laced / Unlaced. Laced was a re-release of On a Day... while Unlaced was an all-new collection of instrumental songs done in her newer style. In 2009 she was able to release her autobiography, The Asylum for Wayward Victorian Girls. She has also released The Opheliac Companion, which provides information and background about the songs on Opheliac.

In 2012 she released another album, Fight Like a Girl, which had been lingering in Development Hell for several years. Despite her initial promises that it was going to be "more metal" than Opheliac was, it ended up being a theatrical concept album based around the fictionalised Victorian story that appeared in The Asylum for Wayward Victorian Girls. According to Emilie, she intends to use the album as part of the soundtrack to the play she's currently writing about the book. The album has created a Broken Base in the fandom because of its differences from the highly popular Opheliac and because the violin plays a much less significant role it in than it had in her previous music. Her current look and shows are generally referred to as the FLAG era by fans.

Her concerts contain examples of:

I want your beautiful suffering, I want to see your 'PAIN!!!'