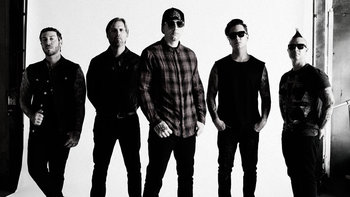 Left to Right: Zacky Vengeance, Brooks Wackerman, M. Shadows, Synyster Gates and Johnny Christ. Watching them from above: The Rev.
Influenced by:
Advertisement:

Avenged Sevenfold is a Hard Rock/Heavy Metal band from Huntington Beach, California. They formed in 1999 while still in high school, with singer M. Shadows, guitarist Zacky Vengeance, drummer The Revnote Short for "The Reverend Tholomew Plague" and bassist Matt Wendt.

The band played the underground scene in America for several years, and their first album, the low-budgetnote 2000$, a budget so low that the drum tracks had to be recorded in one take! and very Hardcore Punk-flavored Sounding the Seventh Trumpet, got them a small but dedicated fanbase in 2001. While the album's commercial success and reception were modest, Waking the Fallen was a much more polished Metalcore album, adding melodic elements, dual harmonies and guitar solos, complex structures, and more singing. It's around that time that the lineup finally stabilized after lead guitarist Synyster Gates and bassist Johnny Christ joined the band.note Justin Sane, the bassist of the first album, had to retire after a suicide attempt that left him with brain damage.

After the success of WTF, the band took a somewhat different direction with their third album City of Evil in 2005. Screamed vocals disappearednote M. Shadows actually took singing lessons prior to recording so that he could hit higher notes., the riffs became faster, the melody even more prominent, the solos crazier, the storytelling more epic, and more symphonic elements were introduced. As a result, most of the album has a strong Speed Metal flavor, sometimes bordering on Thrash. While baffling many of the early fans, the album was their definitive breakthrough hit and remains their highest-selling record to date, as well as their most consistently popular.

After a Self-Titled Album in 2007 that was somewhat more pop-ish and veered into various territories, from Groove Metal to Country Music, the band was going for a darker and more progressive release with Nightmare, a concept album where all the songs were gonna tie into one story… Alas, that project went down the drain when The Rev suddenly passed away on Dec. 28, 2009, just after the album's writing phase was finished, from an overdose of alcohol and prescription drugs for his enlarged heart. The lyrics were mostly rewritten after that, and the last two songs "Fiction" and "Save Me" feature The Rev's last vocal recordings. Musically, the album goes back and forth between dark Groove Metal and heart-wrenching Power Ballads − often within the same song. Mike Portnoy covered for The Rev's spot for the album's recording and the following tournote Some speculate that it might have been a factor in Portnoy's departure from Dream Theater during that same year, although not the only one., before the band found Arin Ilejay (of disbanded Californian metalcore band Confide) who toured with them in 2011 and 2012 and became a full-fledged member in 2013.

For their sixth album Hail to the King (2013), they deliberately adopted a more straight-forward and blues-based sound, closer to Traditional Heavy Metal and reminiscent of the '90s era Metallica or classic bands from the '80s (a bit too reminiscent for some fans and non-fans). But because of Creative Differences Arin was replaced two years later by Brooks Wackerman who had just left Bad Religionnote The band had actually been jamming with Brooks for a year to make sure that their styles meshed well enough this time. The following year was a bit bumpy for the band, as around the same time they left Warner Bros. for Capitol Records, resulting in a lawsuit by the former for breach of contract − they were suppose to do 5 albums under the label, they had only made 4.

After that little incident, the next album The Stage (2016) went back to a more technical and eclectic style, albeit with a different vibe from the pre-HTTK albums, borrowing more heavily from Progressive Metal and Thrash Metal, with Brooks bringing in some of his own ideas and stylistic influences. Meanwhile, Arin joined Islander

In late 2018 they started working on a new album, but the COVID-19 Pandemic threw a wrench into the recording process and the band announced they wouldn’t release new material until they felt they could safely tour again. The album is planned to be released in 2022. The band will release it under Warner Bros. once again to finish the aforementioned contract, but intend to go fully independent after that.

Avenged Sevenfold (or A7X, as they are often called) are amongst the most popular alternative/heavy bands among teens and young adults the world over, and with Waking the Fallen, were instrumental in the creation of the new wave of Metalcore, a genre that combines hardcore punk with extreme metal. The band was in a state of turmoil after the Rev passed away, but they keep moving forward; no easy task as the five had been friends for most of their lives. Their lyrics are inspired by a wide range of themes, including references to the dead/undead, biblical themes and strong themes such as assisted suicide. They are also very vocal in their support for American troops around the world (which includes playing a concert for the soldiers in Baghdad in 2010), and most of their albums feature at least one song from a soldier's point of view. Also, at least one of their songs appears to be from a vampire's point of view, whilst A Little Piece Of Heaven is the Bloody Hilarious story of a couple of murderous zombies. The Stage is the oddball in that department, as it centers on space, man's place in the universe, and the potential and risks of scientific advances like artificial intelligence.

Aside from that, the band has also contributed songs to every game in the Call of Duty: Black Ops series (M. Shadows himself is an avid gamer). Those songs were compiled in 2018 in an EP titled Black Reign.

A lesser-known part of their history is the avant-garde metal band Pinkly Smooth, which featured The Rev on vocals, Synyster Gates on guitar and bassist Justin Sane on keyboards. The band only released one EP titled Unfortunate Snort in 2001, and while the act is unlikely to be revived without The Rev, Synyster Gates has expressed interest in remastering the album someday.