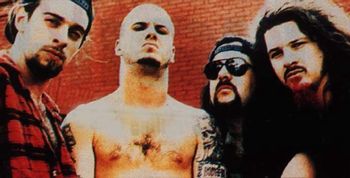 The Cowboys from Hell.
Left to right: Rex Brown, Phil Anselmo, Vinnie Paul and Dimebag Darrell.
Influences:
Related Acts:
Advertisement:
"Can't you see I'm easily bothered by persistence?
One step from lashing out at you...
You want in to get under my skin and call yourself a friend?
I've got more friends like you, what do I do?"
— "Walk"

Pantera was one of the most popular and influential Heavy Metal bands of The '90snote although this is the period where they made their definitive sound and essence., from Texas. Starting as a Hair Metal band, they changed their style after replacing original singer Terry Glaze with Phil Anselmo in 1987. They disbanded in 2003 after a long period of infighting, and any hope of a reunion was dashed after the murder of guitarist "Dimebag" Darrell Abbott in December 2004. In the years afterward, Anselmo and Brown occasionly floated the idea of a "tribute" tour where they and Vinnie would play with various metal guitar luminaries standing in for Darrell, but a combination of Vinnie not wanting to play Pantera songs without his brother and his holding one of the strongest grudges in heavy music squashed those plans, which were then permanently dismissed when Vinnie died in June 2018.

However in 2022, Anselmo and Brown announced that they would be reuniting to perform a tour in 2023, with Zakk Wylde and Charlie Benante taking the roles of guitarist and drummer respectively.

Note that up to Cowboys from Hell are considered, in general consensus, Canon Discontinuity (even by the band).

Albums after the change in style: