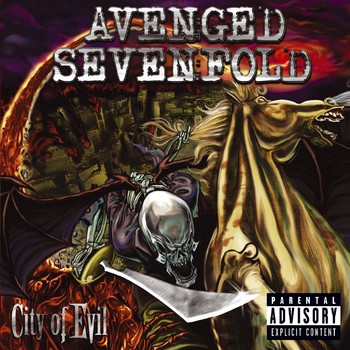 Even the cover is densely packed!
"He who makes a beast of himself gets rid of the pain of being a man…"
—Opening words of "Bat Country", quoting Samuel Johnson from Fear and Loathing in Las Vegas.

City of Evil is the third album by Heavy Metal band Avenged Sevenfold, released in 2005. This album marks the band's transition from the scream-heavy metalcore of their first two records to a lighter but more technical and more melodic brand of alternative metal. This album (as well as its follow-up Avenged Sevenfold) also marks the band's most commercially successful era, where they benefited from heavy airplay on MTV and took themselves far less seriously than in their early years or in The New '10s; it's palpable not only in the band members' pseudo-thugish looks in that period, but also in the album's fast, unbridled, over-the-top and at times experimental compositions. The result is an extremely densely packed record where the band tried to see how all-out they could go, and was also the band's longest album (72 minutes) before The Stage came out in 2016.

The album can be divided in two halves: the first five tracks have a heavy Speed Metal vibe, sometimes even leaning into outright Thrash Metal, all peppered with Punk Rock-inspired rhythms and breakdowns, and follow each other with little time to breathe (as in, there is absolutely zero pause between the the first, second and third tracks). The last five are generally slower but also longer and more epic − the shortest track of that part is just a little under 7 minutes − interspersed with orchestral parts. The two parts are connected by the Power Ballad "Seize the Day", and even that song is pretty aggressive.

It is their first of four albums released by Warner Bros. Records, as well as their best selling one (around three million copies worldwide). And the second-to-last featuring Jimmy "The Rev" Sullivan at the drums.

Tropes found in the album