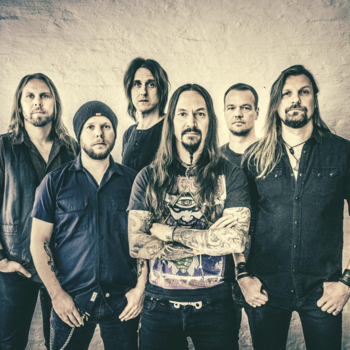 Amorphis are a Finnish metal band from Helsinki, and regarded as one of the more influential bands in modern Finnish heavy metal scene.

Formed by Tomi Koivusaari, Esa Holopainen and Jan Rechberger in 1990, they started as a underground Death Metal band playing very classic garage sound death. After a couple of demos they released their debut, The Karelian Isthmus in 1992 - which, despite the title, was more about occultism, ancient warfare and Celtic mythology. Their real breakthrough was in 1994 with their sophomore release Tales From the Thousand Lakes, which showcased most of their soon-to-be trademark elements; melodic riffs, mixing growls and cleans, influences of Folk Music and Progressive Rock, and above all lyrical themes taken from the Finnish National Epic Kalevala.

Tales' sequel Elegy was another big success, and the two albums are generally regarded as classics. With a new clean vocalist Pasi Koskinen they switched in it from Death Metal to a more progressive Heavy Metal. Since then their career became rather eclectic, with stylistic experiments and line-up changes, no record sounding like the one before, until band got stuck in Creative Differences and lack of motivation which resulted in Pasi being fired from the band in 2004.

Many were close to declaring the band dead, but they found a new vocalist Tomi Joutsen soon and released the album Eclipse in 2006. It was a new breakthrough for them, and they've been going steady ever since, with successful albums and no new line-up changes. They released their 13th album Queen of Time in May 2018, which saw the return of the original bassist Olli-Pekka Laine.