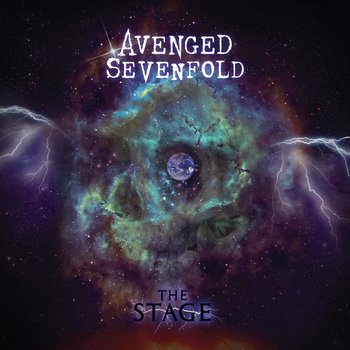 You can see the Deathbat if you squint.
Who is the crowd that peers through the cage
As we perform here, upon the stage?
−Chorus of the title track.
Advertisement:

The Stage is the seventh album by Californian Heavy Metal band Avenged Sevenfold, released on October 28th 2016. It is the first album featuring drummer Brooks Wackerman, who had replaced Arin Ilejay the year before.

While their previous effort, 2013's Hail to the King, was a pretty straightforward and old-school Traditional Heavy Metal album, this one took the opposite approach by veering more into Progressive Metal and mixing many sub-genres into it, with more elaborate song structures and more complex drumlines. Some songs even feature Black Metal-influenced riffs, which was unheard of in the band's previous albums. All of this makes it probably their biggest stylistic change since 2005's City of Evil, while keeping some of the band's trademarks, like the obligatory Power Ballad.

It is also a loose Concept Album, written around the themes of space, artificial intelligence and the self-destruction of mankind, all concluded by the 15-minute epic "Exist" and its final 3 minute speech by physicist Neil Degrasse Tyson. While themes like the horrors of war and the world ending are still present, the storytelling is more science based, unlike the mystical and biblical themes the band was fond of − "Angels" even evokes the loss of belief in God.

The album was also peculiar in the way it was delivered: it was dropped almost completely by surprise two weeks after the title track, despite being announced for December with the title Voltaic Oceans. note a prank pulled with the help of wrestling star and fellow metal singer Chris Jericho, who is good friends with the band members. The band also wanted to make it an "evolving album" and released one by one six cover songs and one B-side during the following year. Also unusually, only two songs of the main album (the title track and "God Damn") were released as singles.

The Stage − as the band expected − elicited polarized reactions, although critical reception was largely positive. Singer M. Shadows described it as "a grower, not a shower". Despite that, it was the first album to earn them a Grammy nomination (best rock song for the title track, which they lost to the Foo Fighters).

Tropes found in The Stage