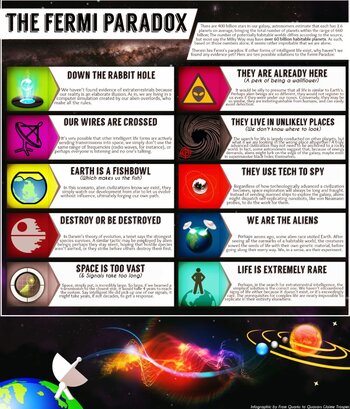 Two possibilities exist: either we are alone in the Universe or we are not. Both are equally terrifying.
— Arthur C. Clarke
Advertisement:

The Fermi Paradox is an observation/question by physicist Enrico Fermi: The universe is very old. Thus far we only know of one planet conducive to life (Earth), and life did indeed arise there, suggesting that wherever life can arise, it eventually will. Given the unimaginable size of the universe, there should be millions of planets with life scattered out there, and surely thousands at least in our own galaxy. And even without Faster-Than-Light Travel, an intelligent spacefaring species should be able to spread across the galaxy in a relatively short amount of time.

So where is everybody?

We should be able to see all kinds of signs of intelligent alien life when we look at the stars, or possibly even evidence of alien life visiting Earth. But we don't.

There are numerous proposed solutions to this question, which break down into two broad categories:

It is also possible that the road between a sterile rock and a space-faring civilization has filters along the way, which cut down the huge numbers the Fermi paradox takes for granted. Those can be either filters that we have crossed ourselves, or filters that are still ahead of us. A filter that we would have crossed is the one of self-awareness and creation of technology. Over five billion species existed on Earth, and a single one, us, has crossed it. A potential filter ahead of us are the limits of technology. Although technological advances are growing at a huge speed, there are some things (time travel, teleportation, faster-than-light speed) that may be forever beyond the reach of human ingenuity or the materials at our disposal.

The Fermi paradox has also been presented as one of the arguments against the Steady state theory,

that states the Universe has existed forever as we know it. With an infinite amount of time behind it — no matter how rare truly advanced space-faring species were — sooner or later, not one but many would appear and we'd see evidence of their existence.

Related to the paradox is the Drake equation,

one attempt to quantify the elements required to actually discover other intelligent life forms out there. The Drake Equation has been criticized because most of its terms are unknown, leaving it to individual discretion. Depending on the numbers you put in, the number of intelligent species per-galaxy as predicted by the Drake Equation can be anywhere from millions to less than one. In the end, these terms can never be known for sure until after we resolve the Fermi Paradox one way or the other: either by finally contacting an alien civilization, or by exploring enough of the universe to say convincingly that they don't exist.

The Other Wiki has more details.

Note that technically, Fermi was actually pessimistic about interstellar travel, and it isn't technically a paradox.

Works that mention or discuss the paradox: