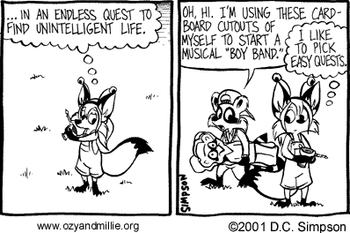 On the other hand, it's a goldmine if you're looking for stupidity.
"Pray that there's intelligent life somewhere up in space,
'Cause there's bugger all down here on Earth."
— Mr. Pink, Monty Python's The Meaning of Life
Advertisement:

A Stock Joke that usually goes something like this:

Did you hear that scientists are looking for intelligent life on other planets? ...because they've given up trying to find it on Earth!

Alien scientist: I came to this planet to investigate rumors of intelligent life. My investigations have conclusively disproven them.

Related to Humans Are Morons, Sufficiently Advanced Alien and This Loser Is You. Contrast Humans Are Cthulhu.