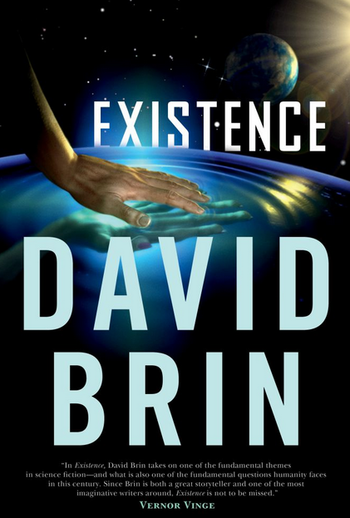 Existence is David Brin's response to the trend in sci-fi away from Space Opera in favor of more earth-based works.
Advertisement:

It is the year 2050. While clearing out trash in orbit, astronaut Gerald Livingstone discovers a strange crystal that displays images of bizarre beings when touched. They have a single message: JOIN US. Meanwhile, on the other side of the planet, a Chinese "shoresteader" discovers a second Artifact in the ruins of a mansion destroyed by global warming. This one declares the first Artifact to be LIARS. As the world's leaders debate what to do about these emissaries from the stars, neo-aristocrats plot with luddites to bring an end to the Enlightenment experiment, a playboy Rocketeer is stranded in the middle of the ocean and rescued by oddly intelligent dolphins, an Intrepid Reporter becomes involved in a terrorist attack on an airship, and autistic hackers search for a cloned neanderthal child. Chapters are followed by excerpts of in-universe essays and interviews on the Fermi Paradox and recent events.