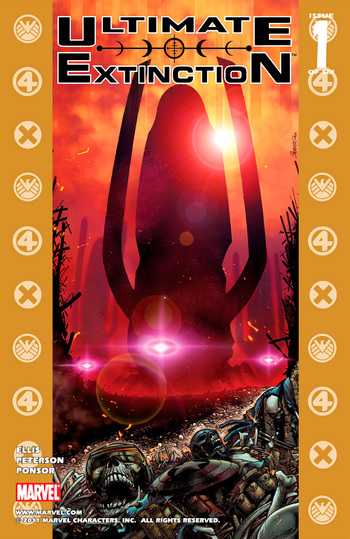 And that's just a bullet. Gah Lak Tus had not even arrived yet at that point.
Advertisement:

The Ultimate Galactus Trilogy is a three-part comic book miniseries that adapted The Coming of Galactus to the Ultimate Marvel universe. Those three parts are Ultimate Nightmare, Ultimate Secret and Ultimate Extinction.

Ultimate Nightmare: A broadcast showing images of death and destruction is suddenly seen all across the world, in all types of media, causing a small-scale wave of mass suicides. S.H.I.E.L.D. locates the source of the broadcast to be from Siberia, so Nick Fury goes to investigate with Captain America, Black Widow, and the Falcon. The X-Men also notice it, and Xavier sends Wolverine, Colossus and Jean Grey. Both teams, unaware of each other, enter into an abandoned military bunker. After dealing with several weird things including leftover Soviet experiments, they find the Vision, an alien robot who warns them about the coming of Gah Lak Tus.

Ultimate Secret: An alien invasion by the Kree tries to destroy an experimental spaceship. Dr. Philip Lawson, the creator of the ship, manages to stop them. It turns out that Lawson is a Kree himself, Captain Mahr Vehl, who had been sent to infiltrate Earth to examine humanity to see if they posed a threat to the Kree, but he actually came to like humanity's culture over time and wants to help them stop Gah Lak Tus. With his help, the heroes infiltrate the ship of commander Yahn Rgg and steal their info about Gah Lak Tus.

Ultimate Extinction: It's discovered that Gah Lak Tus is not really a single creature but rather a Hive Mind - a sentient swarm of millions of machine beings. As it arrives to Earth, Xavier and Jean Grey try to make psychic contact with the swarm, repulsing it and distracting it. Meanwhile, the Ultimates deal with Gah Lak Tus' army of Silver Surfers terrorizing the streets. With that, Reed Richards is able to use his new weapon against Gah Lak Tus, a cannon channeling the raw power of an alternate universe's big bang. This destroys 20% of the entity, who flees.

This story had a sequel, Ultimate Vision, centering on the robot found in the first issue.

Note: If you are looking for the time when the Galactus from the mainstream universe visited the Ultimate Universe, see Cataclysm: The Ultimates' Last Stand.