Orcus on His Throne 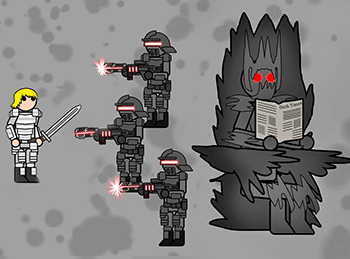 Deep in Mordor, at the top of the Evil Tower of Ominousness, the Evil Overlord awaits. He has his Legion of Doom, the Artifact of Doom, and any other Doomy Dooms of Doom you can think of. His power is vast and he is poised to strike and destroy all we hold dear at any moment.

No? Okay, never mind. Looks like we have a case of Orcus on His Throne. A villain with great power and the potential to wipe out the Forces of Good turns out to be an awfully retiring sort. Sure, they're out there somewhere being evil, probably oppressing someone else, but they don't actually seem to do much; they just sit about resting on their laurels or at most maintaining an active training regimen, waiting for the heroes to come and overthrow them. One wonders how they ever mustered the ambition to climb to their position of power in the first place.

Named for a line in the Third Edition Dungeons & Dragons Manual of the Planes, where it mentioned that Orcus, the lord of the undead, might once more be on his throne, one bony hand clutching his terrible rod. The original justification for this was based in the way D&D works; by not having Orcus (or any other given major villain) actively doing anything, but prepared to strike out against the forces of good, the dungeon masters who were buying the source books and playing the game could have the villains do whatever they wanted or needed them to do for their custom-built campaigns.

Relatedly, this is a very common trope in Video Games, where the villain waits passively in their throne room while the hero is leveling up, killing increasing tiers of their minions, Storming the Castle, occupying each base and methodically foiling their plans. If the Big Bad is coming, why not just wait and prepare yourself? But if the Big Bad is sitting by their Lava Pit of Doom, for whatever reason, just waiting for the Hero to arrive, then of course the Hero has to make their way all the way there.

In the villain's defense, maintaining order in one's domain can be a really time-consuming task, what with all those Rebel Scum, stupid henchmen, backstabbing lieutenants, and the other daily tasks an Evil Overlord has to face every day. And any tactician will endorse the benefits of a fortified position surrounded by your most powerful servants. Then again, what kind of Evil Overlord doesn't take the time to smell the roses, pillage a village, and give a hero a good Final Boss Preview every once in a while? They deserve a little "me" time, too!

The Big Bad might also be spending all their time offscreen searching for a Plot Coupon (Lost Superweapon, Artifact of Doom, etc.) that would render conventional means of conquest unnecessary. Why waste time and effort commanding the Legion of Doom when you could conquer/corrupt/destroy the kingdom/world/galaxy with the push of a button? Still, it's easier to send their minions out to do this instead, which is probably another reason they never have to leave the castle. In the case of a Non-Action Big Bad, the villain acts like this because personally, they don't have power, or at least not the sort that would be useful in direct combat, and they primarily work through their subordinates. It could also be that the hero is already doing something the villain wants, so why interrupt the enemy when they're making a mistake?

Villainous counterpart to Take Your Time. Compare Not-So-Omniscient Council of Bickering. Contrast Royals Who Actually Do Something and Frontline General. The opposite of this is Risking the King. Not to be confused with — though principally very similar to—Greater-Scope Villain. See also The Pawns Go First for when the Big Bad chooses to let their minions fight a particular battle for a while before intervening, or Villain No Longer Idle for when Orcus gets off his throne. Similar to Offstage Villainy, where we only know the villain is evil because the author says so; with Orcus On His Throne, we only know the villain is dangerous because the author says so. May lead to It's Personal with the Dragon, since if the Big Bad is spending all his time offscreen seemingly doing nothing, then his enforcers who are doing the work may become the target of the hero's ire. Can be justified if it's a Dark Lord on Life Support. Lazy Dragon is sister trope unique to literal dragons. Can also overlap with Unknown Rival if the villain simply isn't aware of the heroes for some reason.

For narrative purposes, an author may deliberately write his archvillain in this way. A Big Bad that is defeated by the heroes in every episode will lose its dramatic effectiveness.

This is not to be confused with Sealed Evil in a Can, where an abomination, demon king, or other powerful villain is not interfering because it has been sealed away (or "mostly" sealed away).

JP "recommends" having the Dark Lord not leave their fortress and only send progressively stronger minions out.

Alternative Title(s): Orcus On Her Throne

JP "recommends" having the Dark Lord not leave their fortress and only send progressively stronger minions out.