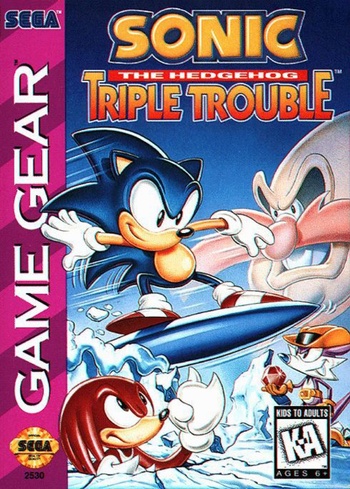 Prepare for trouble! And make it triple!
Advertisement:

Released exclusively for the Sega Game Gear in 1994, Sonic Triple Trouble – or Sonic & Tails 2 as it is known in Japan – is the sequel to Sonic Chaos, and is widely considered one of the best Sonic games to appear on the handheld, mostly due to it being the closest in feel to its 16-bit brothers on the Sega Genesis. It features the debut of Fang the Sniper (or Nack the Weasel, as he was initially known in the English version).

Somehow finally collecting the six Chaos Emeralds without catching the attention of Sonic, Dr. Eggman (a.k.a. Dr. Robotnik) was testing his latest ultimate weapon when suddenly an accident scattered them once more. Eggman was able to find one of them, but of course, Sonic and Tails learned about what happened, and now they're off to find the other five before Eggman can. Expecting this would happen, Eggman deceives Knuckles the Echidna into believing that Sonic and Tails are trying to steal the Emeralds. Thus, Knuckles becomes a nuisance that tries to inhibit the duo's progress. As all of this is happening, Fang the Sniper, a treasure-hunting "weasel" (or half jerboa, half wolf), has successfully located the other five during the commotion and plans to nab them to sell to the highest bidder. Are you up to the challenge of thwarting this Triple Trouble?

In addition to the Pogo Spring and Rocket Shoes from Sonic Chaos, Triple Trouble also gives both playable characters (Sonic and Tails) their own special modes of travel. In Robotnik Winter Zone, Sonic can shred on a snowboard (far more flexible than in IceCap Zone in Sonic the Hedgehog 3), and in Tidal Plant Zone, he can equip himself with scuba jets, which actually allow the blue hedgehog, well known for his super drowning skills, to swim, though for a limited time. Meanwhile, Tails – in Tidal Plant Zone – can pilot the Sea Fox submarine, which comes equipped with a torpedo launcher and easy up-and-down movement while underwater. Tails would use the Sea Fox again in Tails Adventure.

Like the rest of the Sonic games at the time, the American and European boxarts base Robotnik's design on the cartoons, specifically a slightly modified version of his Adventures of Sonic the Hedgehog incarnation.

After Sonic defeats Metal Sonic in Act 3 of Atomic Destroyer Zone, he comes across a sleeping Nack the Weasel. Nack awakens, and it seems like Sonic is going to fight him one last time, but then Nack panics and runs away from Dr. Eggman, the actual final boss in the game.

After Sonic defeats Metal Sonic in Act 3 of Atomic Destroyer Zone, he comes across a sleeping Nack the Weasel. Nack awakens, and it seems like Sonic is going to fight him one last time, but then Nack panics and runs away from Dr. Eggman, the actual final boss in the game.