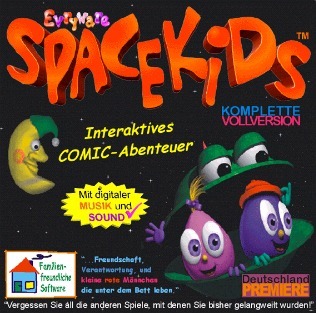 Deet is the pink one, Zeedle is the blue one.

A Children's computer game for the whole family! SpaceKids is Children's Software about Zeedle and Deet who live on the moon with their grandfather, a famous space explorer. When Grandpa doesn't return from an expedition to Earth, the SpaceKids go looking for him. Their journey takes them to a surreal, dreamlike world of adventure and excitement.
Excerpt from the official game website

SpaceKids is an interactive cartoon for the MS-DOS developed by Evryware Software and published by MicroProse in 1994. It has a relatively simple control scheme: When input is required from the player, an icon will appear in the corner of the screen with arrows surrounding it. What the arrows do and which arrows can be used vary from screen to screen, and more often than not different arrows will take the story in different directions.

The game can be played for free on archive.org