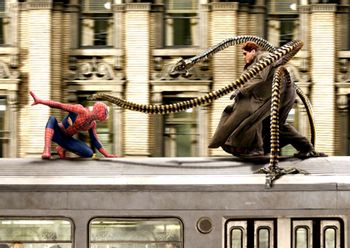 "You knew we’d end up here eventually, right?"
M: What happened?
Eve: They're on the train, ma'am.
M: What do you mean, on the train?
Eve: I mean they're on top of a train!
M: Well, get after them, for God's sake!
— Skyfall
Advertisement:

A staple of Westerns, but still seen in plenty of action films and series, the Traintop Battle is Exactly What It Says on the Tin. Often the result of an aborted Train Escape.

A train has plenty of advantages for an action scene: it's fairly enclosed, without people able to go too far either way for fear of falling off, it has plenty of opportunity for tunnels and overhead lines for your Look Behind You moments, it doesn't need much explanation, the high speed acts as wind to let characters billow dramatically. In short, it turns an Action Movie into a Fighting Game. There's really no other way to justify Boss Arena Idiocy, and it's pretty much ensured that somebody's going to suffer that most dramatic of defeats; a short drop followed by a sudden stop.

If hero and villain are trying to get to a location in time, it means the hero can be thrown off, and "lose" without dying. Or a villain may be forced out of the action, only to return later.

It's also close enough to "normal" people to show the look on their faces as the ceiling collapses, or when someone breaks in through the windows.

A similar effect can be achieved by riding on a truck. Subway trains rarely have the room on top for a good battle, but are still seen occasionally.

May feature the Cool Train, but doesn't have to. May be the result of a Train Job and could in theory be apt for a Thriller on the Express but in practise they prefer to keep to the tense atmosphere.

A subtrope of Interesting Situation Duel. If the battle happens atop a moving gondola rather than a train, then it's a Cable-Car Action Sequence. In videogames this often happens during a Locomotive Level.

Note that if the track is electrified with overhead wires, climbing on the train roof usually results in immediate electrocution. So fights involving those trains tend to be fought inside the train cars. The voltage used on electrification systems is high enough to cause an electric arc from the wire to the hapless victim, and it does happen in Real Life. Still...