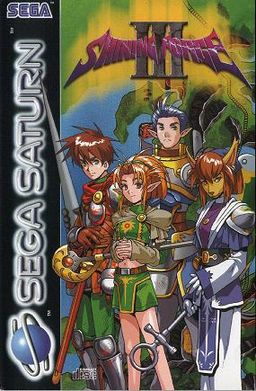 Part of the Shining Series, Shining Force III was a turn based RPG for the Sega Saturn, released during the Saturn's twilight years, and one of the better games for the console. It is a game in three parts, each one following a different main character in a war between The Aspinian Republic and The Empire of Destonia, from which Aspinia declared independence some years ago. Unbeknownst to either side (but knownst to us!), the war is a cover for a demon-worshiping cult to revive Bulzome, an extremely powerful "Vandal" who ruled the entire continent 1,000 years ago before being sealed away. Only the first chapter was released outside of Japan, meaning the game ends with no resolution to any of the larger plot threads, but a Fan Translation project endeavors to fix that. The game is an indirect sequel to the first-person RPG Shining the Holy Ark - going so far as to cast a background NPC from the game as the third hero of SFIII - much like the first Shining Force followed up on Shining In The Darkness. Added a number of new features to the series' combat system, including weapon proficiencies, special attacks for each weapon type, statistics for elemental defense, and a "friendship" system that rewards characters who heal each other or fight the same enemies by improving their stats when they're nearby. The English language release features legendarily terrible voice acting.

The game was released in three parts, only one of which was released outside of Japan. In each part, a different hero led his force through a separate side of the story, with all three joining together for the final charge against Bullzome.