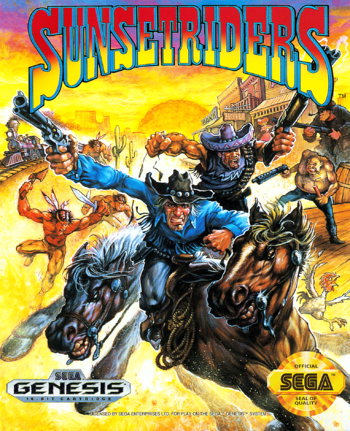 A side-scrolling Shoot 'em Up released for the arcades in 1991, Sunset Riders is one of several four-player arcade games that Konami released in the wake of their success with Teenage Mutant Ninja Turtles: The Arcade Game. The game centers around four bounty hunters (Steve, Bob, Billy, and Cormano) who must hunt down various fugitives during the Wild West to collect monetary rewards.
Advertisement:

Sunset Riders was ported to both the Sega Genesis and the Super Nintendo Entertainment System, in 1993. A port of the arcade version for the Playstation 4 and Nintendo Switch, via Hamster's Arcade Archives series, was released June 11th, 2020.