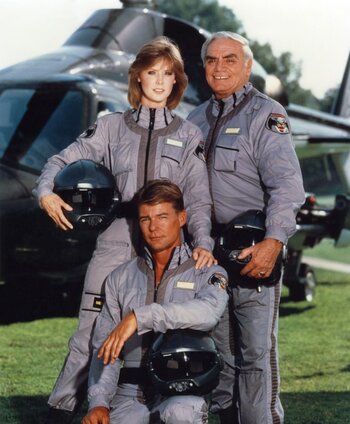 From the guys who brought you the Groundeagle and the Seahamster (l-r: Caitlin, Hawke, Dominic).
"This briefing is from file A56-7W. Classified Top Secret. Subject is Airwolf, a Mach 1+ attack helicopter with the most advanced weapons system in the air today. It's been hidden somewhere in the Western United States by its test pilot Stringfellow Hawke. Hawke has promised to return Airwolf only if we can find his brother, St. John, an MIA in Vietnam. We suspect that Archangel, deputy director of the agency that built Airwolf, is secretly helping Hawke in return for Hawke flying Airwolf on missions of national concern."
Advertisement:

A 1984-87 action-adventure program about Stringfellow Hawke, a helicopter pilot whose brother is missing in Vietnam. The concept of the show is that Stringfellow Hawke manages to blackmail the Firm (a thinly veiled branch of the CIA) by failing to return a prototype helicopter that he'd retrieved for them after the chopper's creator, the evil Dr. Moffet, flew it off to Libya.

Unusually cordial about this act, the Firm proceeds to hire Stringfellow Hawke as a mercenary to fight against various threats from communists or criminals. Several times, the Firm would attempt to recover Airwolf, despite the fact that they routinely allowed Stringfellow Hawke into sensitive areas to discuss the helicopter's placement. The Soviets tried to do the same, although the discussions tended to be far more forceful.

After Season 3 ended, the show was radically retooled with Stringfellow Hawke replaced by his brother Saint John Hawke. The sole season after this, which was made for USA Network at a time where cable series literally had No Budget, was mostly composed of (painfully obvious) Stock Footage and ceased to have much of the previous helicopter action that they had once had.

The show is well known for its theme music that combined techno with a humming meant to invoke helicopter blades. It also includes some very impressive low-level helicopter flying. Airwolf itself was a Bell 222A helicopter with extensive cosmetic modifications to make it appear to be a futuristic military prototype; the actual aircraft was destroyed after the end of the series in a fatal crash while being used as an air ambulance.

An comic book anthology based on the show, Airwolf:Airstrikes, was published in 2015.