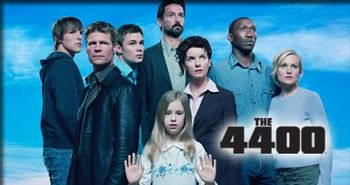 "The world will have to deal with us."
— Jordan Collier
Advertisement:

The 4400 (pronounced "The Forty-Four Hundred") began as a Mini Series created for the USA Network. The Mini Series aired as five episodes in the summer of 2004, and the show was brought back as a series with three full seasons each consisting of thirteen episodes. After that, between the writers' strike and the very evident signs of The Chris Carter Effect, the series was not picked up for a new season.

The basic premise is that four thousand, four hundred people from the past century have been abducted, then Touched by Vorlons, and returned to the present day. They have not aged and they do not remember their abductions. Many of the returnees discover that they have new abilities, such as telekinesis, mind control, clairvoyance, or unnatural control of phlebotinum.

The main characters are Homeland Security Agents Tom Baldwin (Joel Gretsch) and his partner Diana Skouris (Jacqueline McKenzie). Under Dennis Ryland (Peter Coyote), they are members of the National Threat Assessment Command, which investigates the 4400. Tom's nephew Shawn Farrell (Patrick Flueger) is an accidental 4400; he took the place of Tom's son, Kyle (Chad Faust), when he was about to be abducted several years ago. Shawn's return causes friction in the relationship with his brother, Danny (Kaj-Erik Eriksen), as he gets close with his girlfriend, Nikki Hudson (Brooke Nevin). Other 4400 include former USAF pilot Richard Tyler (Mahershala Ali), empath Lily Moore (Laura Allen), and Maia Rutledge (Conchita Campbell), one of the earliest people to be abducted. There is also Jordan Collier (Billy Campbell), a charismatic and enigmatic man interested in the potential usage of the 4400's powers. In the second season, Ryland is succeeded by Nina Jarvis (Samantha Ferris) as NTAC leader, reality-warping 4400 Alana Mareva (Karina Lombard) is introduced, and Lily conceives Isabelle, a daughter with whom she was mysteriously impregnated during her disappearance, who becomes an important character in the second half of the series (played by Megalyn Echikunwoke). In the final season, the NTAC is taken over by Meghan Doyle (Jenni Baird).

Episodes of the series combine the Myth Arc with a "Freak of the Week".

In 2021, a reboot was ordered straight-to-series by The CW.

The 4400 provides examples of the following tropes: