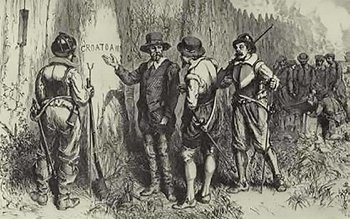 Before the Pilgrims landed on Plymouth Rock and before the meeting of John Smith and Pocahontas, there was the lost colony of Roanoke. Founded in 1587 on an island near the shores of present-day North Carolina, Roanoke was the first English colony in North America. With things going really badly in general, Governor John White decided to head back to England to get some more supplies. Unfortunately, this happened to be in 1588, the year the Spanish Armada sailed against England, and no ships could be spared for Roanoke. Governor White finally managed to make it back in 1590, only to find that Roanoke had been abandoned. The only clue left behind was the word "Croatoan" carved into a fence. White took this to mean that the colony had moved, or at least attempted to move, to nearby Croatoan Island (present-day Hatteras Island), but he was unable to conduct a search at the time.
Advertisement:

So, what did happen to the Roanoke colonists? That's one of the Stock Unsolved Mysteries. The overwhelmingly most accepted explanation is that they went native and assimilated into a local Indian tribe. This theory is supported by a great deal of circumstantial evidence. Croatoan Island was home to a group of Native Americans who are known to have been friendly to the English and various reports over the following decades made reference to Indians with European features, such as gray eyes, living in the area. Other theories suggest that the colonists were wiped out by disease, famine, hostile natives, or rival Spanish colonists. And, of course, there's the usual grab bag of out-there theories involving aliens, Time Travel, supernatural forces, and so forth.

One particular member of the lost colony, Virginia Dare, tends to receive a disproportionate amount of attention. She was not only Governor White's granddaughter, but also the first white child born in North America since Snorri Thorfinnson in the early 11th century. Her fate is as unknown as that of the other lost colonists, but fiction and folklore have very much decided that she lived to adulthood and became a Jungle Princess of some kind. This is the premise behind a famous statue of Virginia Dare, carved by Louisa Lander in 1859, which now stands in the Elizabethan Gardens on Roanoke Island itself. One particularly persistent piece of folklore claims that Virginia was once engaged to an Indian brave, but a jealous medicine man turned her into a deer, and she was then unwittingly killed by her own would-be husband. Fiction about Virginia Dare likes to allude to this story by giving her a deer motif.

The Lost Colony of Roanoke in fiction: