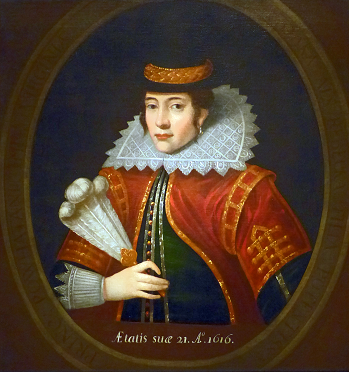 Pocahontas (c. 1596 — 21 March 1617) was a Native American woman who was renowned for supposedly rescuing the English explorer Captain John Smith in 1608 and was a peacekeeper between the English settlers and the First Nations. She was The Chief's Daughter to Wahunsenacah of the Pohwatan Confederacy, an alliance of Algonquian First Nations in Virginia. Her name was a nickname that meant "playful" or "mischievous," and her personal name was "Matoaka".

According to Captain John Smith's Generall Historie of Virginia (1624), in 1608, while helping to establish the settlement of Jamestown, Virginia, he was captured by the natives and was set before a stone altar to be killed. Just before his head was about to be bashed, Pocahontas saved his life by holding his head in her arms. Note that many historians are skeptical about the story, which is not found in Smith's detailed personal narrative written at the time. There are also suspicions that the story might have been more than a bit inspired by early Spanish explorer Juan Ortiz, who suffered a strikingly similar situation and whose account was published in London some years before Smith's own. In any case, this is how the story goes according to the traditional account.

In 1613, Pocahontas was captured by Capt. Samuel Argall and was taken to Jamestown. There, she was converted to Christianity and adopted the name Rebecca. In 1614, with her father's approval, she married a tobacco planter named John Rolfe. Sorry, shippers  As much as you love the PocaSmith pair, Real Life can be one big ship sinker. Plus, if you ship the real Pocahontas with Smith, it would count as totally creepy by modern standards, as the real life Smith was in his late twenties and Pocahontas was pre-teen at the time she saved him. Eight years of peace between the Native Americans and the English followed the marriage.

She gave birth to a son, Thomas, in 1615, and the following year the family went to England. Pocahontas was a sensation in London and entertained King James I and VI, his queen, and his court at Whitehall, where she was given royal honours. To Pocahontas, all these honours pale in comparison to her desire to return to her homeland, but, unfortunately, illness struck her while she was preparing to return to Virginia (either tuberculosis, pneumonia, or smallpox were suspected), and she succumbed to it in the spring of 1617.note This page was launched at midnight, Eastern Standard Time, at the 400th anniversary of her death. She was buried in the chapel of the parish church in Gravesend. Her son Thomas returned to his mother's homeland and became an important settler; many prominent Virginians, such as the First Ladies Edith Wilson and Nancy Reagan, claim to be his descendants.

Tropes portrayed about her in fiction: