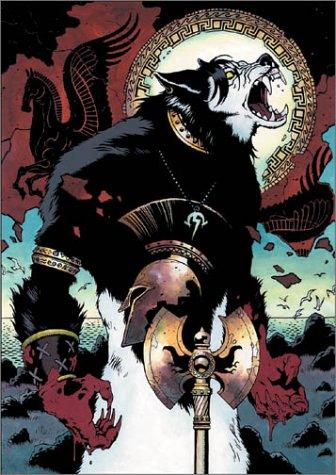 When will you Rage?
Choose no life. Choose no career. Choose to live at the Caern. Choose a totem. Choose a fucking big klaive, choose breeder banes the size of washing machines, Black Spiral Dancers, weaver spiders and corrupted naturae spirits. Choose no sleep, high rage and mental instability. Choose between dedicating jeans or boots. Choose no friends. Choose challenging a Sept elder for your fucking right to exist. Choose the Umbra and wondering why the fuck you are slogging through arse deep Wyrm toxins on a sunny morning. Choose walking through a Scab looking at brain dead, spirit-stunted homids, fisting fucking junk food into their mouths. Choose being butchered to pieces at the end of it all, giving your last in some miserable Wyrmhole, nothing more than a legend to the selfish, fucked-up, Weaver-ridden spawn replacing the beloved defenders of Gaia. Choose your future. Choose to Rage.
— Damien Moore
Advertisement:

A Storytelling Game of Savage Horror.

The second tabletop roleplaying game in the classic World of Darkness line and the second or third most popular. First published in 1992, it was initially supposed to exist in the same universe as its predecessor, Vampire: The Masquerade, but their vastly incompatible cosmologies, histories and themes were among major factors that forced authors to make crossovers between the Old World of Darkness games entirely optional. In the morally-gray area that was the World of Darkness, Werewolf's protagonist faction (the Garou Nation) was one of the more outright heroic—after all, fighting to save the world from the corrupted personification of entropy is difficult to put a negative spin on. Even so, they are still very often monsters in their own right.

The big thematic difference between the two games is that while in Vampire the main source of angst and tragedy is your character's personal condition, in Werewolf it is the condition of the world. The Earth itself is threatened on two fronts: choked by human evil and callous indifference and crumbling under the unseen but relentless assault of an insane embodiment of destruction and corruption from the Spirit World named the Wyrm, a primordial force of entropy driven insane by the machinations of the Weaver's stagnating order and the indifference of the Wyld's creative chaos. As Garou (as the werewolves call themselves), you have the power to fight against an enemy that the mundane humans cannot even perceive.

...except that it is already too late. Your ancestors screwed up too badly. The enemy is too strong. You can't stop fighting with your allies. And the titular Apocalypse is inevitable. Only the heroes of mythic proportions can have any hope of limiting it to merely The End of the World as We Know It instead of annihilation of all existence. But no matter how dim your chances of victory you must fight on, and therein lies the game.

Garou are born into one of three breeds: Homid (werewolf & human parents), Lupus (werewolf & wolf parents), or a Metis (a forbidden union of two werewolf parents, which is sterile and has an inherent flaw of either a physical, psychological, or spiritual nature); non-Garou children of at least one Garou parent are mundane Kinfolk (who themselves have a rare chance of having Garou children). The lunar phase under which the Garou is born determines their Auspice (class) and their spiritual power: The Trickster Ragabash (New Moon), the spiritualist and crafty Theurge (Crescent), the well-balanced Philodox (Half), The Bard Galliard (Gibbous), and Blood Knight Ahroun (Full). Further, the Garou are split into Tribes based on their ancestry, of which thirteen remain:

Advertisement:
Three other tribes have since gone extinct:Other sub-tribes and groups have also cropped up throughout Garou history: the Siberakh of Siberia who are the result of Silver Fang experiments to crossbreed with Wendigo kinfolk to try to eliminate the genetic disorders resulting from centuries of inbreeding, Ronins who have been exiled from Garou society for violations of Garou law, local groups such as the Hakken of Japan and the Boli Zousizhe of China who have diverged greatly from their original tribes, and the Skin Dancers who are Kinfolk who through a forbidden rite of werewolf sacrifice became werewolves themselves. The 20th anniversary books also introduce the Singing Dogs of New Guinea, a tribe that currently numbers only four and has lived in isolation for generations.

by Hunters Entertainment, in partnership with Paradox Interactive, the current owners of the World of Darkness, though this edition was seemingly cancelled following a consolidation of the brand in late 2020, with a new version of the book in the works at Paradox itself.

A video game called Werewolf: The Apocalypse — Earthblood was announced January 2017, developed by Cyanide Studio and published by NACON with a release date of February 4, 2021

Werewolf: The Apocalypse — Heart of the Forest, a Visual Novel with RPG elements, on October 13, 2020.