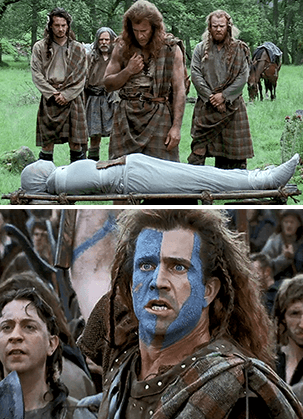 A subtrope of Body Paint where, just before a conflict, a character will take some sort of paint — or improvise with something closer to hand like mud or ashes — and apply it just below the eyes. The effect is something like Tribal Face Paint or army camouflage, and the implication is clear: The Gloves are Off.
Advertisement:

Sports players, especially in American Football, often do this before matches. Ostensibly, this is to reduce glare from the sun (this was examined by the MythBusters, who deemed it plausible) but its hard to imagine that it's entirely accidental that they're also making themselves look like warriors.

Compare Lipstick-and-Load Montage, where ordinary makeup is applied as if it were a preparation for battle, and Nose Art, when this is applied to a Cool Plane.