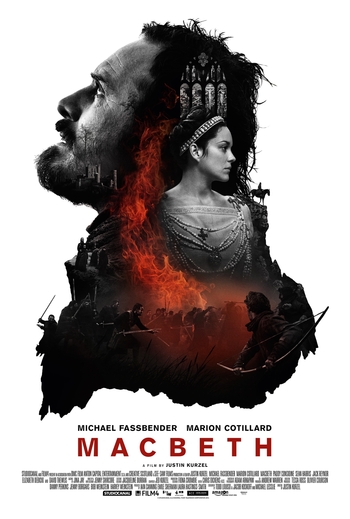 It is, of course, an adaptation of William Shakespeare's Macbeth. Macbeth (Michael Fassbender) is first seen crushing a rebellion of the traitorous Macdonwald, in a brutal battle. Blood is still dripping from swords when Macbeth and his good buddy Banquo (Paddy Considine) meet four (no, not three) witches, who address him by his title Thane of Glamis, but also Thane of Cawdor. The last says "Thou shalt be king hereafter." Macbeth is skeptical because he is neither Thane of Cawdor nor king. But when he is met by a messenger from King Duncan (David Thewlis), who informs Macbeth that he has been rewarded with the title of Thane of Cawdor, the wheels start spinning in Macbeth's head.

When King Duncan surprises everybody by naming his son Malcolm as his heir apparent, Macbeth and his ruthlessly ambitious wife Lady Macbeth (Marion Cotillard) elect to take matters into their own hands. Duncan obliges them by paying a visit to Macbeth's castle, where Macbeth murders Duncan in his bed and pins the blame on Duncan's bodyguards. Macbeth is anointed king, but many people are suspicious, including Banquo and also Macduff, the Thane of Fife (Sean Harris). Elizabeth Debicki appears as Lady Macduff.

Other cinematic versions of Macbeth include a 1948 movie by Orson Welles, a 1971 film by Roman Polański, and a 2021 version by Joel Coen. Bamburgh Castle on the north coast of England was used as Macbeth's castle in both the 1971 and 2015 films.