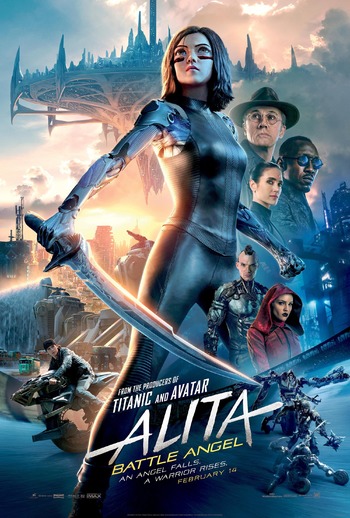 "I do not stand by in the presence of evil."
"Does it bother you that I'm not completely human?"
— Alita
Advertisement:

Alita: Battle Angel is a 2019 Dystopian Cyberpunk Science Fiction film and a Live-Action Adaptation of the Yukito Kishiro manga Battle Angel Alita, directed by Robert Rodriguez and produced and co-written by James Cameron.

The film is set in the year 2563, over 300 years after a catastrophic war known as "The Fall" has left Earth devastated. While scouting the junkyard metropolis of Iron City beneath the sky city of Zalem, cybernetic scientist Dr. Dyson Ido discovers a disembodied female cyborg with a fully intact human brain. Ido rebuilds the cyborg, who does not have any recollections of her past, and names her "Alita" after his deceased daughter.

The film was released in the UK on February 6th, in most other countries on February 14th, and released in China and Japan on February 22, 2019 by 20th Century Fox. It has the distinction of being Fox's last released film as an independent studio and distributor before Disney finished acquiring its assets a little over a month after its release, as well as the first film produced by Cameron's Lightstorm Entertainment company since Avatar. It was also Disney's first 3D Blu-ray release in North America since Guardians of the Galaxy Vol. 2, though the 3D disc was exclusive to the 4K release.

The film has a character sheet.

♫ May you always be brave in the shadows
'Till the sun shines upon you again
Hear this prayer in my heart, and will ne'er be apart
May you stay in the arms of the angels... ♫
Feedback