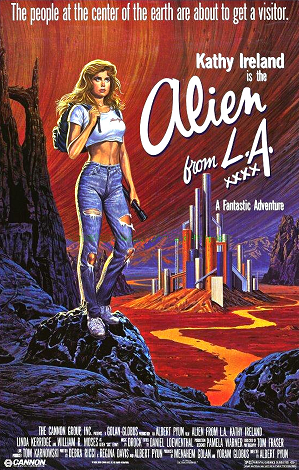 Alien from L.A. is a 1988 science fiction film directed by Albert Pyun and starring Kathy Ireland. It is loosely based on Jules Verne's novel Journey to the Center of the Earth, with some minor allusions to The Wizard of Oz.

Wanda Saknussemm (Ireland) is a nerdy social misfit with large glasses and a squeaky voice who lives in Los Angeles and works at a diner. After being dumped by her boyfriend for "not having a sense of adventure", Wanda is informed via letter that her father, an archaeologist, has died. She flies to northern Africa and while going through her father's belongings, she finds his notes about Atlantis, apparently an alien ship that crashed millennia ago and sank into the center of the Earth. Wanda comes across a chamber beneath her father's apartment and accidentally sets off a chain of events that ultimately cause her to fall into a deep hole.

An unharmed Wanda wakes up deep within the Earth to find Gus (William R. Moses), a miner whom she protects from being slain by two people. Gus, who has a very strong Australian accent, agrees to help Wanda find her father, who she believes is alive and trapped underground. Wanda soon discovers that both she and her father are believed to be spies planning an invasion of Atlantis. During her adventures, Wanda's appearance changes from nerdy to attractive (by removing her glasses and using a steam vent to clean her skin). People from the surface world are referred to as "aliens" by Atlanteans, and when Wanda is overheard talking about Malibu Beach by a low-life informant (Janie Du Plessis), she soon becomes a hunted woman and must dodge efforts at capture, both from the mysterious "Government House" and from thugs in the pay of the crime lord Mambino (Deep Roy). Much mention of Wanda's "big bones" are made during these sequences.

Wanda's efforts at escape are aided by Charmin (Thom Matthews), a handsome rogue who (briefly) assists her flight and falls for Wanda. She is ultimately captured by the evil General Pykov (Du Plessis again), who wants to kill both Wanda and her incarcerated father. The Atlantean leader decides to free Wanda and her father, provided they remain quiet about Atlantis. Gus shows up and helps the duo escape while fighting off General Pykov and her soldiers. Wanda and her father board a ship that takes them back to the surface and the film ends with Wanda on the beach, wearing a bikini and a sarong. She refuses the advances of her ex-boyfriend and is soon reunited with Charmin, who inexplicably appears on a motorcycle.

This film was followed by a sequel, Journey to the Center of the Earth (1989), though it was not originally intended as a sequel. According to the credited director (Rusty Lemorande): "Only the approximately first 8 minutes of the film were written or directed by me. The remainder of the film is actually the sequel to Alien in L.A. (sic) which was tacked on and renamed Journey to the Center of the Earth in order to fulfill contractual commitments by the production company to foreign distributors."

Kathy Ireland appears in a very brief cameo at the end, though Janie Du Plessis returns. The main plot involves a group of kids getting lost underground during a volcano eruption, wandering around for a long time doing nothing, and then some of them winding up in Atlantis.

Alien from L.A. has examples of:

The sequel Journey to the Center of the Earth provides examples of: