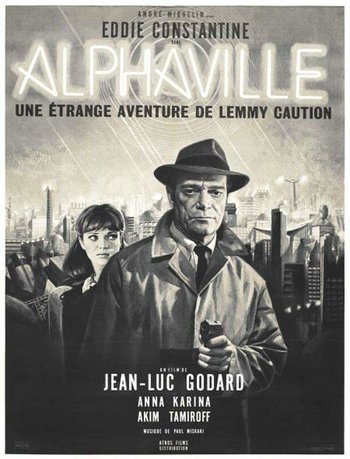 Alphaville: A Strange Adventure of Lemmy Caution is a 1965 French New Wave film by Jean-Luc Godard, starring Eddie Constantine and Anna Karina. A Genre-Busting work that mixes dystopian Science Fiction and Film Noir, the film is considered one of the Ur-Examples of Cyberpunk. The film uses no special props or futuristic sets, instead having been shot on in location in Paris, the night-time streets of the capital becoming the streets of Alphaville, while modernist glass and concrete buildings — things that to a 1960's French audience were still rather novel and strange architectural designs — represent the city's interiors.

The story follows secret agent Lemmy Caution (Constantine) as he infiltrates and investigates the futuristic city of Alphaville, under the guise of a journalist. Alphaville is a dystopian, alienated society, where free thought and individualist concepts like love, poetry, and emotion are forbidden, and logic and order is strictly enforced under the threat of execution. The city is ruled by the mysterious Professor von Braun and under constant Sinister Surveillance by his creation, the sentient and dictatorial Alpha 60 computer.

This films contains examples of: