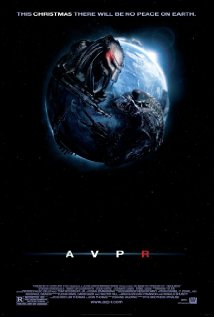 Aliens vs. Predator: Requiem is the 2007 sequel to Alien vs. Predator, and was directed by the Brothers Strause in their first feature film.

Taking place shortly after the last movie, the Chestburster that emerged from Scar has now grown into an adult Predalien and causes the Predator ship to crash down by Gunnison, Colorado. Releasing a swarm of Facehuggers upon the town, the simple lives of the citizens are disrupted by the increasing spread of the Xenomorphs. Things don't get any easier when both a lone Predator and the National Guard are sent to contain the outbreak before it spreads to rest of the planet.

Tropes in Aliens vs. Predator: Requiem: